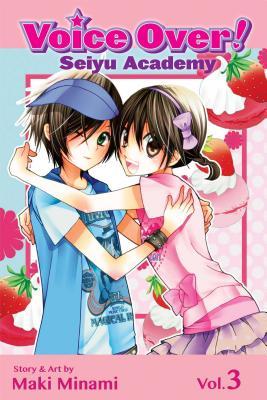 Summary:  "Hime Kino's dream is to one day do voice acting like her hero Sakura Aoyama from the Lovely Blazer anime, and getting accepted to the prestigious Holly Academy's voice actor department is the first step in the right direction! But Hime's gruff voice has earned her the scorn of teachers and students alike. Hime will not let that stand unchallenged. She'll show everyone that she is too a voice acting princess, whether they like it or not!!

Hime just got her first big break in voice acting, but it means she has to move out of her house and pretend to be a boy! Her new manager, Yamada, is willing to put in the extra time to train her personally, and Hime's hope of being a voice actor seems close to being fulfilled. But Yamada insists that he'll only use her for male characters. Will she have to give up on Lovely Blazer to see her dream come true?"

Review:  Hime is now living on her own. Part of her deal is showbiz. That and how, outside of school, she is living a double life acting as a boy to make it.

This is my favorite volume so far. We get a lot of fantastic backround information on Mizuki and the girl he liked and once tried to help. We learn why he is is eager to help Hime. So sweet, yet so sad. The story drew my closer to the Aqua boys.

Hime is struggling to use her prince voice on a regular basis but a "cure" may have been found. Her story in this plays a bit smaller of a role as we get to know the other characters which was nice.

Another adorable volume, this series just seems to get better and better. Great for older audiense but clean and playful enough for younger reads too.

**I was given a digital copy from Viz Media in exchange for a fair, honest review. All thoughts and opinions expressed here are strictly my own.**