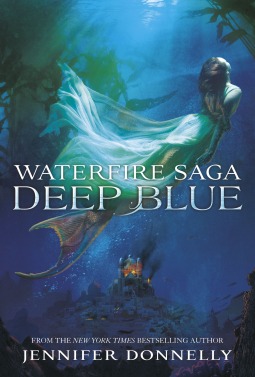 Waterfire Saga: Deep Blue (1)
by Jennifer Donnelly
Genre(s): Fantasy, Young Adult, Youth
Pages: 368
Published: May 2014
Publisher: Disney
Summary:  "Waterfire Saga is an epic new series set in the depths of the ocean where six mermaids seek to save their world.

When Serafina, a mermaid of the Mediterranean Sea, awakens on the morning of her betrothal, her biggest worry should be about reuniting with handsome Prince Mahdi, her childhood crush. Instead she finds herself haunted by strange dreams foretelling the return of an ancient evil, and dealing with the deaths of her parents as assassins storm the betrothal ceremony, plunging the city into chaos.

Led only by her shadowy dreams and pursued by the invading army, Serafina and her best friend Neela embark on a quest to avenge her parents' death and prevent a war between the mer nations. In the process they discover a plot that threatens their - and our - world's very existence."

Review:  This was a decent underwater fantasy-adventure that has potential. And yet for all the good it is, there is also some head-spinning vocabulary.

Seraphina is the heir the kingdom and her whole life seems set before her before and attack destroys her apparent path. But just before the attack she has a 'dream' of a prophecy she must help with. For she is one of 6 that must save the sea.

This books word choice and creation had me utterly overwhelmed at first. We are given a lot of made up words, terms, names and places. Seriously, every paragraph seemed to have at least 3 new words. This continues throughout the books but is a little less overwhelming thank goodness. But the beginning was so bad I almost DNFed this. Some were just a play on words (like Merlfriend instead of Girlfriend) . And then others are real words in all sorts of languages! We are given Italian, Qin, Arabic, Brazilian slang, Portuguese, Romanian, Greek...

It gets worse... we also have several made up languages including Mermish, Dracdemara, Rurus, and more!! You know Scuttle from "Disney's The Little Mermaid" and how he calls a fork an dinglehopper? Well there is A LOT of that type of wording happening and it leaves us guessing what they are talking about. Sometimes i just gave up and went with it like I would a Dr Seuss book where it just isn't meant to make sense.

Leaving all that aside, the adventure is quite good. Although I must say the attack on Seraphina's home had me sad. I always put mermaids in a happy place so reading about them dying left a pout on my face. Some of the imagery is pretty like when we hear about Seraphina's room or when they change her look to disguise her.

Seraphina is a nice mermaid but very insecure to her role. Neela, her best friend and companion, is a stronger character that I really liked. We get other characters including Blu, Ling and many others.

There is betrayal, death and action...a small dash of romance...loyalty and friends...all mixed together is a "Save the World" adventure.

I will read the next one. I am curious how it ends but I do warn new readers, be sure to have patience and focus when you start reading this!

*I received a copy of this book from Disney in exchange for a fair and honest review. All opinions expressed are strictly my own.*