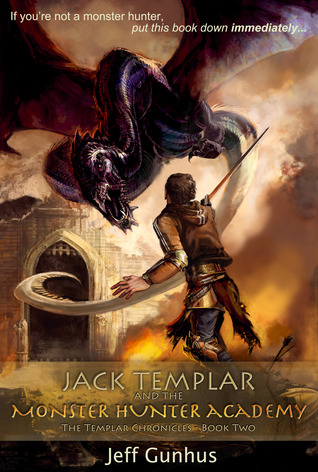 Summary:   "After barely surviving the onslaught of monsters that tried to kill him the day before his fourteenth birthday, Jack Templar leaves his hometown on a quest to rescue his father and discover the truth about his past. Joined by his friends Will and T-Rex, and led by Eva, the mysterious one-handed monster hunter, Jack sets out for the Monster Hunter Academy where he hopes to find answers to his questions. Little does he suspect that the Academy is filled with dangers of its own, many of them more terrifying than anything he’s faced so far."

This is book 2 of the series!  For my review and information on the first book GO HERE.

Review:  Okay, I think I have found a new fantasy/paranormal author I like. Let's just start off with saying that if you like the "school/training" stories such as Harry Potter, Percy Jackson, etc then you have a good chance of enjoying this book.
Not saying I love it as much as the world of Harry Potter or that it is necessarily as good(HP is really up there on the favorites list after all)but that it can be quite an enjoyable adventure for fellow fans.

This book picks up shortly after the first book (Jack Templar, Monster Hunter) leaves off. Jack is now on his was to the 'academy' to gain further knowledge into his family backround. The head of the school has the anseres he needs but she is determined that he needs to gain a firmer knowledge and ability of what it means to really be a monster hunter. So let the schooling begin!

We get a new character in this book-Daniel. Talk about a grudge! He and Jack are instantly at odds. And toss in the fact that the both like Eva and it seems hopeless. Frankly I did not like Daniel. He doesn't even give Jack a chance and even tries to set him up! Grrr.... Will is another character I was less than pleased with. He needs an ego check! He reminds me of Ron from Harry Potter and the Goblet of Fire in this book. T-Rex, luckily, I come to like more and more. He isn't a warrior but he is strong of heart and when the going gets tough he is there for his friends.

While the first book was more paranormal with the vampires, werewolves, and zombies; this book has a more fantasy feel with the wolves, trolls, goblins, dragons and more. Especially the giant spider! The scene there gave me serious heebie-jeebies! I hate spiders! So well done there, Jeff Gunhus! I won't tell you why I creeped out but I will say it is more than it seems.

This book now has me quite excited for the series! Lots of adventure for young adults and adults alike. While violent at times, the book is actually quite clean. And while both Jack and Daniel like Eva there is no sense of a love triangle. Which is refreshing. Although I do not know if that rule will remain throughout the series. Time will tell. Regardless, Jeff Gunhus has done a very good job weaving stories together (Daniel's, Tiberon's, etc) into a grand adventure that is a delight to experience.

**I received an eCopy of this book in exchange for a fair and honest review.**