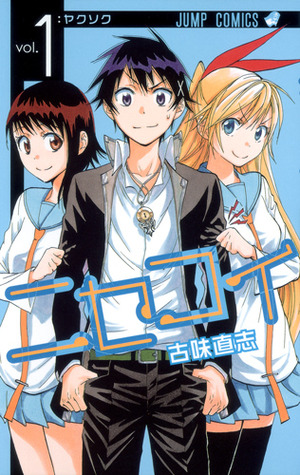 Summary:  "It’s hate at first sight... Rather, a knee-to-the-head at first sight when Raku Ichijo meets Chitoge Kirisaki! Unfortunately, Raku’s gangster father arranges a false love match with their rival’s daughter—who just so happens to be Chitoge! However, Raku’s searching for his childhood sweetheart from ten years ago, with a pendant around his neck as a memento, but he can't even remember her name or face!"

Raku is your typical decent, average guy in high school who is given a nasty surprise when he gets hope. He has a fiancee!! And she is none to thrilled about this (or him) either. She is very pretty but has a violent side. Her name is Chitoge.

So the question i why are they engaged? They are the heirs to rival gangs who want peace and this is the only solution the members would accept. So while they despise each other, they must pretend to be madly in love. After all, the gang members cannot be aware this is all a setup arrangement...

I don't think I could do it. Pretend to be with someone I not only don't like but have a level of disdain for. Too add to Raku's complications are two other factors. the first in Onodera: the shy, sweetheart he DOES like. The second is a promise he made years ago but does not remember who that promise was with.

It's a cute, funny series but not very original. I will continue the series but I am a bit concerned. So far the plot seems like it should only be 2-3 volumes but I know there are at least 6 so far so I hope they somehow they thicken the plot versus just drawing it out.

*I received a digital copy of this manga from Viz Media, via Edelweiss, in exchange for a fair and honest review.*