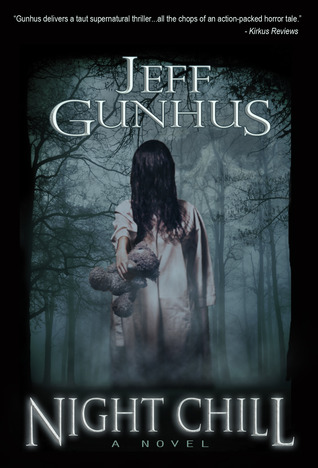 Night Chill (1)
by Jeff Gunhus
Genre(s): Horror, Paranormal, Thriller
Pages:  437
Published:  May 2013
Publisher: Seven Guns Press
Summary: "From the author of Jack Templar Monster Hunter comes a supernatural thriller for adult audiences. Jack Tremont moves his family to the quiet mountains of Western Maryland hoping to leave behind a troubled past and restart his life. Instead, he finds himself caught up in a nightmare when his daughter Sarah is targeted by Nate Huckley, a mysterious and horrifying stranger driven by a dark power that will stop at nothing to possess Sarah. When Sarah goes missing, suspicion falls on Jack and he must uncover the secrets of the small mountain town of Prescott City and face the evil secret hidden there. As he digs further, he learns the conspiracy reaches more deeply than he could have imagined. Finally, he will have to face the question, What is a father willing to do to save his child? The answer? Anything. Anything at all."

Review:  Warning: This book comes with some adrenaline highs! One of the most gripping books I have read in a long time! This book is said to be in the tradition of Stephen King and Dean Koontz. Well, this book is not quite to the standards I have for those two but very close. What I can say up front is that after reading this, Jeff Gunhus is well on his way to being one of my favorite authors.

This book wastes no time getting into this. While drinking with a friend Jack witnesses a man get struck by lightning. As he dies he gives Jack a cryptic warning about his daughter, Sarah. That night, on his way home Jack pulls over at a rest stop where an man tries to get to his girls. And the creepy adrenaline moments begin! A car crash later has the attacker in a coma but that is not the end of things Jack starts to see things don't seem right. No one believes him. Not even his wife. But the man who went after Sarah seems to be haunting him somehow and Sarah knows things she shouldn't know....

The eerie setting envelopes you in this book. At points, even I was not sure what was real, and what was not. They are several heart-pounding moments. Jack quickly learns not everyone is who they seem. Some want his daughter but who are they and why. And how is Huckley (the attacker) do what he is doing while in a coma? Lots on unanswered question kick start the paranormal suspense-horror. We have ritualistic killings, psychic abilities, cavern spelunking and more happening.

While I struggled at times connecting to Jack (a popular name in Jeff Gunhus' books) I still greatly enjoyed the book. He was not an easy character to relate to. Lots of secrets that we do not understand until the end. But boy do I feel for him when he has no one to turn to for help. Even he thinks he is crazy at times. The question is: Is he? His wife I connected with easier, even if her lack of being able to connect the dots annoyed me. Huckley is one crazy wacko that I would never want to come across in real life. Right from the get-go he freaked me out, all the way until the end.

The ending gets quite intense and very grotesque. Vivid imagery is going to make sleep tonight interesting to say the least. But it just goes to show how good it was!

I will definitely be grabbing the next book when it comes out. I am eager for future books by Jeff Gunhus. He writes a good range of books that I have enjoyed, but this is my favorite so far!

*I was given a ecopy of this book in exchange for a fair, honest review.*