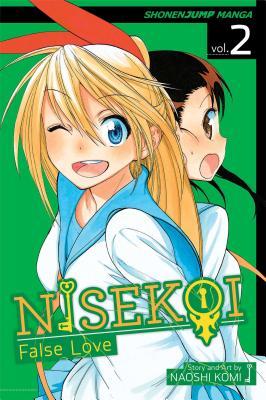 Summary:  "Though Raku and Chitoge's false love is off to a rocky start, they have everyone fooled! However, Raku's still hung up on his childhood sweetheart and wears a pendant around his neck as a memento. But one big problem prevents him from finding the girl whom he promised to marry—he can't remember her name or face! To further complicate matters, Onodera, Raku's current crush who also harbors secret feelings for him, accidentally overhears the two arguing over their false relationship!"

Review:  Which one is it?! This book adds more complexity as we begin to really question who Raku's promise was with. Filled with humor, hints of romance and a couple beatings we are offered this next installment to the series.

Onodera is so sweet and adorable. I love her. But her shy nature can also be a point of frustration. I wanted to shout "Just show him already!" a few times. She certainly is most likely candidate for the promise, but I don't know...

Raku is great. A nice guy, caring , down to earth or overall fun to be around. Too bad his being around often gets him in trouble with Chitoge. She sure loves to wail on him! While I like her, I hate how abusive she can be. I know much steams from her own insecurities, which we begin to see here, but still.... Be NICE, girl!

Once again, fun art, a fast-paced read that has me itching for more! Especially with the arrival on a new character...Dun, Dun, Dun!!

*I received a digital copy of this manga from Viz Media, via Edelweiss, in exchange for a fair and honest review.*