The Strain, Book 1. by David Laphiam, Huddleston and Jackson (review) 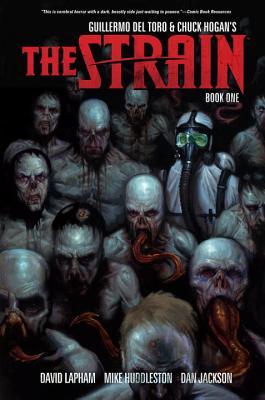 Genre: Horror, Graphic Novels
Published: July 2014
Pages: 273
Publisher: Dark Horse Books
Summary:  "When a Boeing 777 lands at JFK International Airport and goes dark on the runway, the Center for Disease Control, fearing a terrorist attack, calls in Dr. Ephraim Goodweather and his team of expert biological-threat first responders. Only an elderly pawnbroker from Spanish Harlem suspects a darker purpose behind the event--an ancient threat intent on covering mankind in darkness. In one week, Manhattan will be gone. In one month, the country. In two months--the world.
This horrifying first chapter introduces an outbreak of diabolical proportions that puts a terrifying twist on the vampire genre!"
Review:  Death, horror, and vampires all wrapped up in a graphic novel! This is the first TWO original volumes combined into one book! This was something I could not pass up. Although, I must confess, when I first got this, I had not fully read the summary so based on the covers and images I had scene with the biohazard warnings, I expected zombies. Still, I was very happy to have read this and more to come below and the vampire/zombie confusion.

The book centers mostly on CDC expert Dr. Goodweather and his partner. They are on assignment to figured out why a plane lands and then suddenly everyone in the plane mysteriously dies. But as the doctor and his partner investigate further, they learn the passengers are not "dead" for long. They come back as vampires and start attacking others. A race against time with enemies on all sides.

We mainly follow The good doctor as he struggles to balance his home life and work. He is in an ugly custody battle for his son when this all goes down. There is some great personal relations going on in the book. At first he is facing a medical mystery. Then a violent nightmare! In addition to his character we also get snippets into other officers, doctors, victims and a villain who is using his power and money to destroy mankind.

The art is very well done. Each character unique and very expressive. The violence is very graphic. And please note, very mature artwork containing violence and nudity. While I can enjoy what is in this, I would be horrified if a child got their hands on this! Great detail is given on every image. And it is very well done. The full page inserts were especially well done! The characters looked almost real. The only thing less that thrilling were that many of the "vampires" looked the same. But I will blame that on the transformation they undergo.

Speaking of the vampire concept, I still think of them as more zombie like. Besides their blood being drained and then filled with a white fluid replacement they are more zombie in reactions, behavior and overall looks. The exception is the "Masters." They way the move and attack very zombie like. Although they do burn in sunlight. Still, with how their stinger/tongues work these are some nasty, weird creatures of the night!

Now I love the concept! It is dark, fast-paced and will have you on edge and looking at the images with a twisted sense of glee. I love how the doctor meets one who is well familiar with the vampires but by doing so has even more consequences. Lots of action and great characterization fill these pages. My favorite character so far is the rat exterminator. Smart, logical, level headed and witty. I hope to see more of him in the future volumes.

Fans of the Walking Dead will likely enjoy this. The characters do not have quite the depth yet, but they and the story are constantly improving as it moves along. I will definitely be keeping an eye out for future volumes.

**I received this for review via Netgalley. All thoughts and opinions expressed are strictly my own**