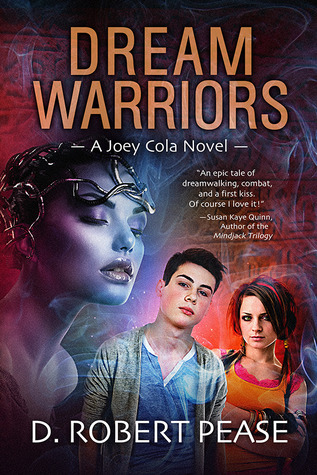 
Pages: 200
Publisher: BOA Press, LLC
Summary: "Joseph Colafranceschi is a fifteen-year-old, self-described geek, living in the Bronx. The second youngest of twelve sons of the former U.S. ambassador to Italy, Joey discovers that a small Egyptian statuette given to him by his father, endows him with power to control his dreams. After his brothers throw him down a manhole, Joey is drawn into a hidden society of warriors who have been battling a reincarnated Egyptian Pharaoh for over 3,000 years. In the dream world, everyone is not what they appear to be, and it’s impossible to tell who to trust. As Joey slips deeper into a world of gladiator battles and clandestine missions into other people’s dreams, he catches the eye of a beautiful Egyptian princess. The only thing that keeps him grounded in reality is his best friend Alex, but even she may not be who he thought she was."
Review:  I must say I was very impressed with this book. Very enjoyable. It even had me jumping off my bed in anxious excitement at one point. A mix of fantasy, action, mythology and our very own dreams.


Joey is a 15 year old genius about to graduate high school and move on to MIT. Picked on by his older brothers but looked upon extra foundly by his father. One day his father presents him with a rare, valuable gift. The next day, after suffering an especially brutal treatment from his older brothers, Joey awakens in a world very different than the one we are most used to. The world of dreams.

Here Joey is told he has special gifts and is taught to fight, change his shape and much more in this world. Yet when he wakes up, he is back in the "real" world. Joey learns fast, especially when he learns his best friend is there. Not to mention he wants to catch the eye of the lovely Cleopatra ('Daughter' of the dream ruler, Pharaoh). Yet this world may not be as wonderful as it seems. There are forces at work and they soon are found manifesting themselves in reality as the world food supply is being destroyed.

All sides seem to look to Joey as if he is a tipping point in the scales. Yet Joey does not know who to trust or even who everyone is. After all, looks can be deceiving! I like how we see snippets of puzzle pieces here that Joey just seems to totally miss. Especially about his own friend and family! A bit naive. Yet I like his character. I really like his best friend, Alex. Very loyal and caring. I soon came to the conclusion of Trust No One in this book. Well, except for Joey since we get the story from his point of view.  So it hooks the reader and keeps them guessing!

While I do like Joeys character I never did see how he is oh so smart as to graduate early and go to MIT at only 15. Nothing about him seemed above average. Yes, he can grasp concept of the dream world quicker than others apparently but he also has a special "boost." I hope in the next book his intelligence shows a bit more.

Otherwise I really enjoyed this. There is a bit of romance, some fun fight scenes, lots of "familiar" faces, magic and a hint of mythology. A wonderful blend that I quickly latched onto and held on to the end. As soon as I finished this book, I jumped online to learn more about the next book. I am so impatient to read it!