Prince Iggy & The Kingdom of Naysayer by Aldo Fynn (review) 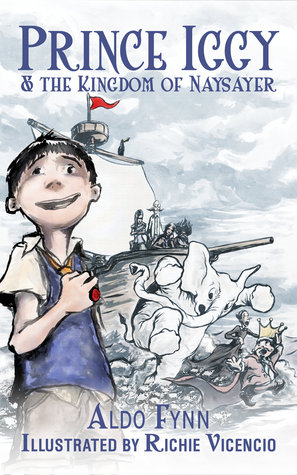 Summary:  "This quirky and fast paced story with 30+ illustrations is ideal for middle grade readers and adults looking for a different kind of hero. Kirkus Reviews called the first book in the Adventures of Prince Iggy "An entertaining fantasy with a quirky, inventive storyline that shows how things invariably turn out badly for bullies." IndieReader wrote "a charming story about finding out who you are and following your heart" and Foreword Clarion said, "Fynn is adept at making scenes come to life...while weaving an entertaining yarn." San Francisco Book Review concluded, "The book is going to be devoured by readers of any type, whether they're looking for some fun fiction, a comical read, or a page-turner."

All Iggy Rose wants is for the kids at the Naysayer Academy to like him, and one special girl in particular. But instead, he gets teased and taunted. Every day, he eats alone in the cafeteria and gets beaten up after school on the playground. But when a cruel prank leads to Iggy's escape from the academy, a wild, unimaginable adventure begins.

Why is King Naysayer offering a hefty reward for Iggy's capture? When Iggy joins forces with an eclectic cast of characters, he discovers the answer. But before he can escape from the kingdom of Naysayer, Iggy must first reclaim what is rightfully his. Does this sad, lonely boy have the courage to battle the biggest school bully, a mean headmistress, and a greedy, cruel king? Will Iggy finally believe in himself and discover his true destiny?"
Review:  This book was a very fast, fun read for me. A perfect book for elementary children ages 8-14 or even adults who just need a relaxing, amusing read.


Iggy is an orphan boy in the Kingdom of Naysayer. He was found on the kindgom's shores when he was a baby and taken straight to the school where he lives. He has no friends and it teased and ridiculed constantly by his peers. This immediately pulls at my heart for Iggy. Even his teacher is awful and allows and encourages this. Then we meet the King of Naysayer. Greedy, nasty man takes the one thing that Iggy ones. A red ring found on him when he first arrived in the kingdom.

So imagine all the school bullies of elementary school that you know. That is every person in this kingdom. Lying is encouraged, bad deeds are praised! And alone stands Iggy, lonely with a moral code different from the others.

When Iggy is taken by a man claiming he is the long lost prince of their Kingdom, Iggy does not know what to believe. All he knows is he doesn't want to be "Stinky Iggy" anymore.

This book touches on finding ones own identity, and especially lots of elements on various bullying. I had hoped for a bit more "lesson learned" type of story for those around Iggy but that is not what we really get. But we go watch as Iggy stands up for what is right and true. I do advise with the bullying aspects, younger children should read with an adult. Especially if the child has experience with bad bullying. It might be a bit sensitive.

Iggy is a great kid that I enjoyed reading about. This was book one of a series. A light read with a little comedy and periodic pictures to give ones eyes a break from the words. The chapters are short, making the reading for children easier for break stops. Definitely a thumbs up read!