The Stars Are Falling by Michelle Birbeck. Review and Guest Post 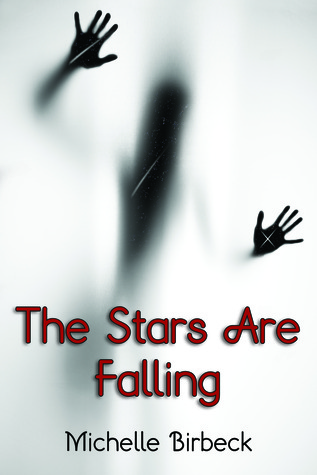 The Stars Are Falling
By
Michelle Birbeck
"Is saving the one she loves worth killing the whole world?"

Available from: Amazon, Kobo, Barnes and Noble, and TWCS PH

Jenny is content trying to survive university and sneaking glances at her housemate, Dale, in between hours spent watching the night sky. When the first meteor streaks through the night, landing close enough to shake the house, however, everything changes.
What’s left in the crater isn’t a lump of rock from outer space, but something that looks like a man. Soon after, the killing begins. Anyone who gets in their way is disintegrated with an all-consuming light so hot nothing remains.
Hundreds more descend from the heavens, bleaching the night sky, shaking the ground. They want to eliminate all threats to Earth, starting with the biggest one: the human race.
Jenny and Dale know a way to do both: save Earth and stop the human race from being wiped out. They just have to stay alive long enough to convince the falling stars to spare the human race.


The Stars Are Falling


What is the world like where the 'stars' live? In The Stars Are Falling it is mainly based on earth, so it would be interesting to get your perspective on the 'stars' home in more detail.


I’ve thought a lot about what it’s like up there with the Stars. How they pass the time and how they communicate, and most of all, what it looks like.

Imagine you’re floating in a warm pool, ears covered by the water. All the noises around you are muted, and it’s peaceful, with just the right amount of quiet without being uncomfortably silent. Now close your eyes, and instead of seeing dark, the whole of the world is there, like a giant picture that you can zoom in on. A single thought, and you can see anyone, anywhere in the world you want. You can watch them, hear them, see what they’re up to.

But the real beauty of being up there with the Stars doesn’t lie in what you can watch on Earth, it lies in what you can see of the rest of the universe. Think of the darkest night you’ve ever seen and all the stars in the sky, and then double those stars, double them again, and add a whole load more. It’s as bright as the day time, and as colourful as a carnival. </ span>

So with all that to look at, you would think that the Stars never get bored, but that’s not entirely true. Occasionally, the Stars come down to Earth and have children with people, not only to increase their numbers but to see what it’s like down here. Seeing it from way up high is one thing, but it is entirely different to experience it in person. Like looking at a country you’ve never been to and finally deciding to go.

They spend a lot of time in the heavens, but thankfully, there is plenty for them to look at here on Earth.


My Review (Vailia's Page Turner):  This was an interesting, quick read. The title is very straight-forward and sets the staged for a face-paced story that does not slow down until the end. Simple, straightfoward and even thought-provoking.


Jenny is a student looking to major in Nuclear Physics. She lives with 3 other roommates (Dale, Alexis and Mark) in an off cmapus home. While out star gazing one night she witnesses what is assumed to be a meteor shower but later learns they are Stars. Guardians of Earth, coming to save the planet by destroying all humans. Yikes!

The pace is very fast, from the stars arriving on earth, to the early death of her mother, to the discovery of who she is. Jenny tries to outrace the clock, outrun the Stars and save her planet. Her roommates join her. Dale is a sweetheart who quickly hooks up with Jenny in the beginning and sticks with her through thick and thin. Alexis comes off as a party bimbo at first but we soon learn she is more. Mark, while least liked by Jenny is actually one ofthe characters I liked. While he cares for the others, he just wants to come home, but when it is time to get down and dirty he is still there for them.

While I liked how fast the book moves, keeping me very engaged, it seemed to skip over character development a bit. And yet there are times we get glimpses into Jenny's past a bit to get a feel for her. Yet overall, I just struggled to get into the characters. I never got the chance to really feel for them. Also the imagery. One part can seem very well done, such as watching the stars fall. Yet when she describes the house broken into, or the journeys through York, I drew a blank. Part of the problem I am sure is that I have never been to York, but I felt as though it was written with the expectation of knowing the layout. Otherwise, very well written.

This book is also quite thought provoking. We quickly learn the Stars are there to destroy us for hurting Mother Earth. Jenny's ideas for saving herself and everyone else had me thinking what solutions would I come up with? Also makes me reflect on what I can do to help or hurt. The book brings up a very good point. This planet is dying at the rate we use up natural resources, pollute everything etc. So bravo on the plot for making me pause, think and reflect on my own habits!

Couple other things I wish were different or seemed off. One, I would have liked a bit more Science aspect to everything. It would have fit in nicely. Also, how does one 19 year old think she is going to convince not only stars, but all the people of the world? All government leaders, environmentalists and general public must all get on board. This just seems a bit out there to me. I would have felt differently if one of them had a connection to a high ranking official or something but no. These are just small things though, and don't really detract much from the book.

So overall, I enjoyed it. I goes so quick with everything going on that time flies by while reading. Also, the smaller cast keeps a smooth, easy to follow story. There is the insta-romance going on between Dale and Jenny which is overall very sweet but a little unreal in some aspects but I did like the relationship between them. Only wish there was a bit more! Clean enough for teens yet the plot is something adults can enjoy as well. A pleasure to read.

*I received a Ebook arc to read and review. All opinions expressed are strictly my own.*

Michelle has been reading and writing her whole life. Her earliest memory of books was when she was five and decided to try to teach her fish how to read, by putting her Beatrix Potter books in the fish tank with them. Since then her love of books has grown, and now she is writing her own and  looking forward to seeing them on her shelves, though they won’t be going anywhere near the fish tank.

There was suppose to be a giveaway, but of course, come my day on the Tour, it is over.  SORRY!!!

Discussion:  What are ways you try to help the environment and or this planet?   What do you wish you did?

Also, do you think there is intelligent life besides those on Earth?