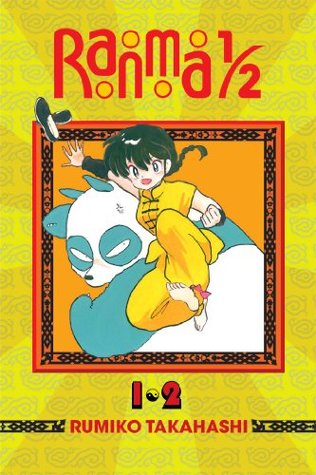 Summary:   "A remastered 2-in-1 edition of the all-time classic hit from one of Japan’s most beloved creators, available for the first time in a format faithful to the original work.

One day, teenaged martial artist Ranma Saotome went on a training mission with his father and ended up taking a dive into some cursed springs at a legendary training ground in China. Now, every time he’s splashed with cold water, he changes into a girl. His father, Genma, changes into a panda! What’s a half-guy, half-girl to do? "


Review:   I originally started reading this series several years ago (13 years ago I believe). However I missed many volumes so it was very scattered. The thing with this series is that, for the most part, that is okay as it is filled with several individual stories. However, reading this I got to see a bit more of the flow and character use and introductions that I missed previously. Especially early on. A lot more ties together here.


Also, I will admit I have seen most of the anime. So my opinion coming into this is a bit bias as I am already a fan. Still I found this a great refresher and will tell you from the start-this is a favorite of mine! A comedy you should not miss!

The cast of characters in this series perfect for the story.

Ranma- The lead male. Martial Artist for "Anything Goes Martial Arts". Fell into a cursed pool of water when training with his father and now turns into a girl when splashed with cold water. His character is fantastic, especially as the story moves along. He is cocky and arrogant yet has a rarely seen soft side as well.
Akane- Ranma's new-found fiance. Has unique trouble with guys. Very tomboy. While Ranma seems to be the fighter in the series, she somehow always beats him. I have always liked her, even if she does have violent tendencies (which most everyone does in this series). She seems to often see things for what they are. Although one thing that surprised me is that Akane’s features seem softer and even more feminine than the anime here.
Genma- Ranma's father. Honestly his dad is a loser to me but does add comic relief. He, too, fell into a cursed pool and turns into a panda!
Soun-Akane's father. He is suppose to be a martial artis as well but I don't get it. Wish I had a better feel for his character.
Nabiki-Akane's scheming sister. Manipulative for making a profit wherever she can. Often causing trouble for Ranma.

We get other characters too that will add their own twists to the story but I don't want to spoil any of them for you.

This story had me regularly laughing at the situations. The eccentric characters really make this compilation of stories worth reading. Rumiko Takahashi does an amazing job blending so many unique aspects and situations together to make this work, it is very creative!

Warning: This series is for older teen-adult. There is violence. Not bloody violence but still lots of it. A main theme is the "Anything Goes" martial arts! Also nudity. Ranma has no modesty in his female form and runs around topless. So we get breast shots. If this bothers you, do not read. It is not done in a high sexualized standing, and is part of the comedy acts but it is there.

I really do recommend this series. If you are looking for a good laugh, check it out. Even if you are not a Manga/anime fan, if you liked the movie Hot Chick, or The Three Stooges, check this out!

*I recieved a copy of this book in exchange for a fair/honest review. All thoughts and opinions expressed are strictly my own*