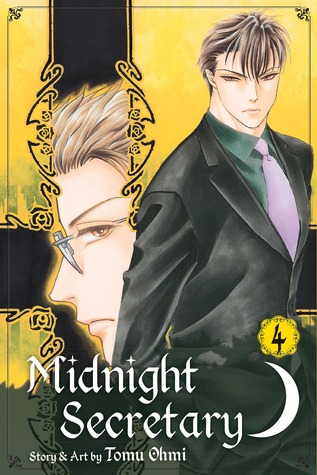 Official Summary: "Kaya Satozuka prides herself on being an excellent secretary and a consummate professional, so she doesn’t even bat an eye when she’s reassigned to the offi ce of her company’s diffi cult director, Kyohei Tohma. He’s as prickly–and hot–as rumors paint him, but Kaya is unfazed...until she discovers that he’s a vampire!!

Kyohei has left the family firm to start his own business, and Kaya is at his side as his indispensible secretary…but only at night. By day she’s still the executive secretary for Erde, a subsidiary of the company Kyohei just quit. The increased workload isn’t a problem, but when the president of Erde discovers that Kaya is seeing an ex-Tohma Corp. executive, he starts to question her professional ethics! Will being vampire’s secretary put an end to her career?!

Review:  I am starting to feel a heavy repetition going on at this point in the series. While I love the artwork, I feel like little happened in this volume.

Kaya just keeps going on how she is "his secretary" which is quickly getting old. She wants to be more obviously but she doesn't even try to envision herself in another light. So she frustrated me a bit. Every few pages we get that thrown at us. I wanted to just scream "move on already!" So a bit too much internal dialogue for my taste.


Now for what plot movement we do get involves a new vampire that Kaya starts to perceive as a threat. While she is starting to stand up for herself a bit more, she still needs to be more assertive. But trying to give her some slack as she is pulling double duty throughout this volume. I got to give her character some kudos for diligence.

Still a good series and the end gives us just enough hope that the pace is about to pick up once more!