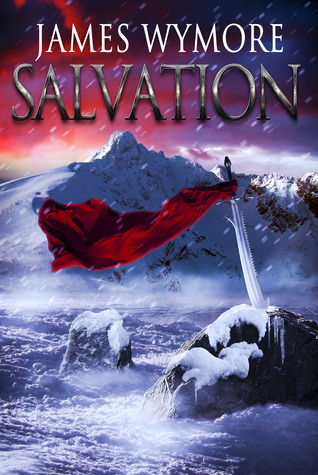 Summary:  A man wakes on a frozen battlefield when a scavenging couple finds him among the dead. As they nurse him back to health, he is struck with the horrible realization he can’t remember who he is or anything about his past. Taken in by the kind pair, he begins helping with their farm. She even takes him to meet her family, especially her single sister. The ideal life offered in the high mountains of Winigh is shattered when he sees a transport bringing enemy monsters to the shores below. Cut off by high snow on the pass, their fate will soon be the same as the town his company failed to protect in the last battle, if this estranged soldier cannot help them fight off the next wave of invaders. Even worse, the people of the town don’t trust this Selene soldier. He has a strange resistance to their folk magic which some say make him as dangerous as the enemies preparing to destroy them.

Review:  Fantastic! That is one word of many to describe this book. This was the first book I ever read by James Wymore. And I can now say it won't be the last. A new land is brought to life, filled with vivid characters, amazing scenery, and pulse-pounding anticipation!

The book starts off with a man who wakes up with no memory and is given the name "Elwood" by the couple that found him. He was the lone survivor of an enemy attack by a race of sea monsters called the Hyzoi. Elwood quickly settles into life with the couple as a part of the family. But still his past haunts him. He is torn between the secrets of the battle and who he was and the life he is now happy with.

A few seasons after he is saved he spots the Hyzoi bringing in more ships to attack once again. It is winter and the mountain community is cut off from any help. If an army was defeated by these monsters what can a 100 villagers do?!

This story builds in such a way that you cannot tear your eyes from it. Like a single small ember as it ripples, shifts, sparks and builds into a blaze! That is what happens here. The pace is calm, and serene. The landscape and lifestyle presented to us in a way that frees the imagination. I could see each cottage and homestead. Each character was wonderfully portrayed. Macey and Bowen especially tugged at my heart.

The depth that is given is amazing! This story is heartfelt and dramatic. Part drama and romance mixed with intrigue and adventure. Not to mention an stunning battle. Each new scene presented I could feel a part of. The tragedies moved me to near tears, the anticipation of battle had me on the edge of me seat, nervous for these characters you easily come to love and adore.

The only downsides were these: One it was short. I wanted more!!! And secondly Elwoods past may be unknown to him but for me it was painstakingly obvious. So a little less clues there would have added a bit more to the story.

Otherwise, I loved this book! I am eager to read more books by James Wymore and I highly encourage this book to anyone who loves fantasy, epic battles, surviving/chases or even fans for historical romance. The blending of aspects makes this an appealing read for men and women about equally. So be sure to check this book out!

*Special thanks to Curiosity Quills Press for allowing me to read a copy of this book through Adobe Digital Editions. This was provided via Netgalley in return for an honest review. All opinions expressed are strictly my own.*