Magi: The Labyrinth of Magic 3 by Shinobu Ohtaka (review) 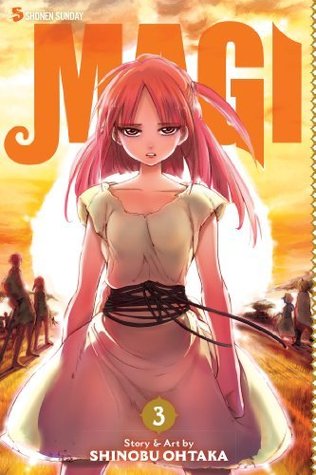 Magi: The Labyrinth of Magic (Vol 3)
by Shinobu Ohtaka

Deep within the desert lie the mysterious Dungeons, vast stores of riches there for the taking by anyone lucky enough to find them and brave enough to venture into the depths from where few have ever returned. Plucky young adventurer Aladdin means to find the Dungeons and their riches, but Aladdin is just as mysterious as the treasures he seeks. Together with his friend, Ali Baba and the genie, Ugo, Aladdin sets out to find his fortune in the depths of the endless dunes&#8230;

Aladdin finds himself among the Kouga tribe, who live deep in the desert far from Qishan. An emissary from the Kou Empire arrives offering peace, but when it turns out to be an offer they can't refuse, things take a turn for the worse. Aladdin learns more about the legend of the Magi and the Rukh, bird-like beings of light, with whom he appears to share a deep connection..."

Review:  WARNING: IF YOU HAVE NOT READ PREVIOUS VOLUMES, SPOILERS MAY BE GIVEN REGARDING PAST VOLUMES!

So in this volume we finally get to see what happened to Aladdin after the Dungeon. He finds himself in the desert lands where the Kouga clan lives. There he makes all new friends. He also gets more insight into what a Magi is. When members of the Kou Empire show up, things do not go well. But we do get to meet another Djinn and Magi. Aladdin has a very important task in life but the Djinn are not very forthcoming as to how the task works. Looks like Aladdin has more to learn...

We also get to flash over to Morgiana. Now that she is free she is traveling toward her homeland. At first I though she was a dry character but as I get to know her better, I find myself really admiring her.


Every time I get a feel for what is going on in this series, some new aspect comes along, giving me more to figure out. While the story line seems simple enough, it thickens the further in you get. There seem to be many layers of storytelling going on, leaving me quite intrigued to see where this goes.

*Please Note: This is not the Disney's Aladdin! The story is more mature and very much geared to Teens or older for the audience! Plus the story has quite the twist from any Aladdin or Arabian Nights stories we have known.

**I received a eCopy of this volume from Viz Media, via Edelweiss. Special thanks to them for this opportunity. All opinions expressed are strictly me own.**