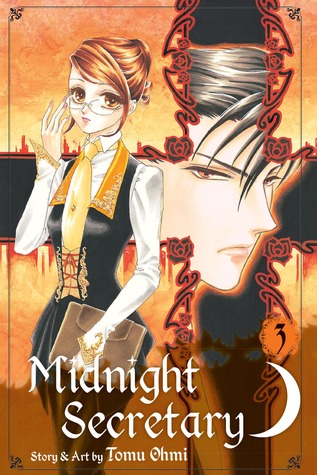 Summary:  "Kaya thought she had found the perfect job when she became the private secretary of Kyouhei Touma - the director of a tableware company of the same name. Kyouhei is a capable director, but his arrogance and sluttish behavior are almost legendary. Kaya is doing her best to prove that she is capable in her work, but one night, by accident, she discovers his secret... of him being a vampire!

Kaya has been temporarily reassigned to another company, but she won’t let that keep her from her lover, Kyohei. She’s appointed herself as his special secretary, and she spends each night at his condo helping him work and quenching his thirst for her delicious blood. Love suits Kaya, but trouble looms now that she’s caught the eye of her other boss!"

Review:  Finally! Relational progress is made! We finally get a really good glimpse at the inner Kyouhei in this volume.

Kaya is now under a longer term contract with Erde. Something is brewing inside Kyouhei. He doesn't hide things as well as he may wish. His blossoming jealousy is obvioius as she draws closer to her new boss. He wants Kaya to himself and his possessive side comes out.

He disappears for awhile and ends up leaving his family company to strike out on his own. While his purpose is not fully known I could tell one thing is certain. He wants Kaya back! I loved watching and reading as he comes to terms with some of his feelings. He is apparently having a hard time accepting them but he is at least starting to acknowledge them.

Kaya's loyalty is torn between her word and contract and her reputation as a secretary with her desire to assist Kyouhei. She is a very strong character and this creates an interesting mix with Alpha personality Kyoehei. Yet it is a quite, inner strength.

Again, the artwork is wonderful. I really do like how Tomu Ohmi creates the characters. How they stand even speaks volumes! Lots of subtle clues can be seen in body posture. And as a heads up, the ending has quite the manga-steamy adult scene!

*I received an eCopy of this volume from Viz Media via Edelweiss. Given in return for a fair and honest review. All opinions expressed in this review are strictly my own.*