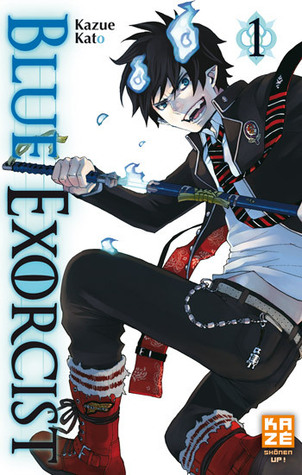 Summary:  "Raised by Father Fujimoto, a famous exorcist, Rin Okumura never knew his real father. One day a fateful argument with Father Fujimoto forces Rin to face a terrible truth – the blood of the demon lord Satan runs in Rin’s veins! Rin swears to defeat Satan, but doing that means entering the mysterious True Cross Academy and becoming an exorcist himself. Can Rin fight demons and keep his infernal bloodline a secret? It won't be easy, especially when drawing his father’s sword releases the demonic power within him!"
Review: How have I overlooked this series for so long? Shame on me for not reading this sooner. I have known of the series but it has always been on the back-burner for me and not a priority. Guess what series is now on my to-buy more of list? Yep! This one.

This series starts off with young, adolescent Rin who seems to be struggling to find his place in life. No real objectives regarding school or life, he has just skated by. His younger brother Yukio is someone is is proud of and has recently been accepted to a prestigious school but Rin's future seems to be a mystery. One day he can suddenly see demons! His adoptive father, Father Shiro Fujimoto, explains that he is the son of Satan himself.

When Satan comes to collect his son his father dies protecting him and Rin vows to become an exorcist and to defeat Satan himself. However in doing so, he unleashed his own demon side. Which include a few physical altercations. He is sent to a special school which just happens to be the same school where his brother is at. And Yukio has a few surprises of his own!

I really enjoyed this intro volume. I can't help but love Rin. He can be perceived as a total slacker (and sometimes is) but his heart is in the right place. And now he has a huge chip on his shoulders! I can't help but empathize with him now! It is a good blend of paranormal, mystery, action and comedy.

The demons so far are almost amusing. Especially how many of them look! but I am sure I will get to see the scarier demons as we continue through the series. After all, this is the beginning and Rin is just a rookie in training. There is a bit of confusion with the timelines of when Yukio started school, to the death of Father Fujimoto to Rin attending the school. Otherwise I am quite impressed with this.

In addition to enjoying this manga, I now have the anime as one to see soon. I can't wait to see how they compare! I will definitely be continuing this series!

*I received this from Viz Media via Edelweiss for review. All opinions and thoughts expressed are strictly my own.*