Killer Within by Jeff Gunhus (review) 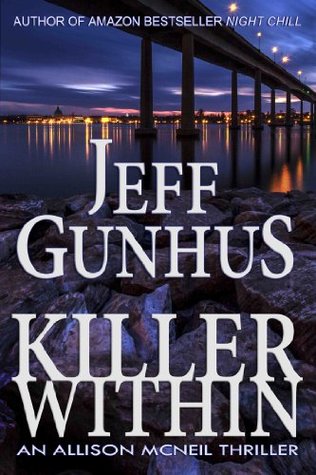 Summary: "Arnie Milhouse is a murderer. A millionaire with dozens of kills in his past and no one the wiser. But when his name surfaces in connection with the death of a D.C. call girl, Arnie knows it’s only a matter of time before the FBI puts the pieces together. As he makes plans to disappear and leave his life in Annapolis behind forever, he meets a beautiful, mysterious woman who takes an interest in him. The perfect final victim. He can’t believe his luck.

Only luck has nothing to do with it.

Allison McNeil has returned to Annapolis, a city that she promised herself she would never come back to, not while the cruel memories of her time at the United States Naval Academy still haunt her. But she’s willing to do just about anything to get close to Arnie, even if it means having to face down the demons of her past. Her plans work and soon she and Arnie find themselves locked in a dangerous dance of seduction and betrayal. But Arnie isn’t the only one who carries a secret and the dark truth about Allison McNeil makes a final confrontation between them inevitable. Neither of them know it, but they're on a collision course that only one of them will survive."

Review: A most enjoyable thriller. I always enjoy a good cat and mouse chase and in this novel I get it double time. Two vastly different characters are both predator and prey each in their own right. The question is, who will win?

Arnie is s serial killer who was abused by his wife until one day he snaps and has been killing ever since. the only person he cares about is his young son. When he finds himself under investigation he will find himself forced into a position of drastic choices. Arnie is one twisted piece of work and we get some interesting psychological aspects. He thinks himself a strong killer who keeps outwitting the police but he isn't quite as smart as the thinks. This wealth has likely helped some and he is good, but just not all that. He is one sick man. What he does with his victims....Eww!

Allison meets Arnie as a photographer but she is not all she seems and has an agenda of her own. But her past is about to collide with her all at the same time. Time is running short for the parties to make their moves. I liked her but also had a hard time trying to connect with her character. Maybe because it isn't easy to find out who she really is.

Overall, quite enjoyable. Not an amazing thriller yet but a good first for the author. I would be very willing to read another thriller by this author.

*I received an ecopy of this book in exchange for a fair and honest review. All opinions expressed are strictly my own.*