The Awakening by Marley Gibson (review) 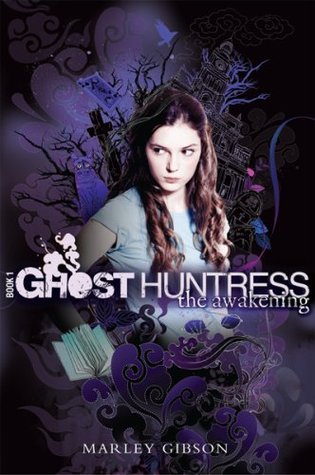 Summary:  "The first in a trilogy. Get out your tape recorders, crystals, and extra batteries-- you're about to go where our world meets the spirit world.
Psychic Kids, Paranormal State, Haunting Evidence--these and countless other television shows are making believers out of millions of people: Ghosts exist, and they're living right beside us. For centuries, individuals have been trying to prove the existence of ghosts. But without hard evidence, it's been difficult to make the case. But now as science and technology have progressed, ghost hunters have been able to use scientific means, along with more traditional psychic tools, to make their case. Photographs, video recordings, and sound recordings are all producing some amazing results.
In this new series, Ghost Huntress, meet Kendall Moorehead, a seemingly typical teen. When her family moves from Chicago to the small historical town of Radisson, Georgia, her psychic abilities awaken. She's hearing, feeling, and seeing things that seem unbelievable at first, but with the help of the town psychic, Kendall is able to come to terms with her newly emerging gift. So, together with her new BFF, Celia, Kendall forms a ghost hunting team. They've got all the latest technology. They've got Kendall for their psychic. Now they're going to clean up Radisson of its less savory spirits.
The story is fiction. The science is real. Welcome to a new reality."
Review:  Not a bad story with some good potential. Sadly, it ended up frustrating me more than interested me. I can think of several that would love this book but it was not for me.

Lets start with the good, before I scare anyone off. There was a very good blend of characters with very diverse personalities. At first they seem very stereotypical but some do start to branch out from how they first appear. The ghosthunting research put into this was very good. Imagine the TAPS team with a ghost psychic. That sums everyone up. It was a nice, light, quick read that can easily draw a reader into the series.

My problems with this book: The text speak!!! I hate hearing people use this in speech but thought, action, speech and more is WAY too much! If the story was not drawing this would have killed me for continuing the book. Too many teens cannot spell as is and I feel this book is a bad influence on the English language. Also I had a problem with how realistic this book is, the psychic aspect meeting the religious aspects. I can accept one of the other but the combination, in the manner in how it is done is offensive to me.

Overall, not for me. I even tried (and failed to finish) book two of the series. Nope. Now some will like it. If you like the show Ghost Hunters, check this out. Just be warned of horrible writing styles.