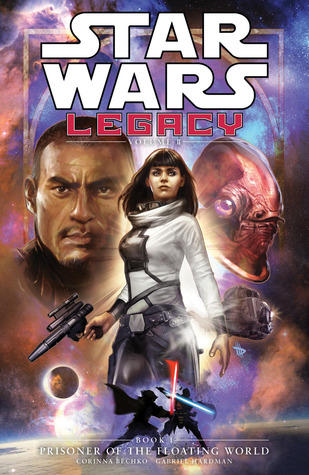 Summary:  "Ania Solo is just a girl trying to make her way in the galaxy—and have a little adventure along the way! But when she stumbles upon a broken communications droid and a missing lightsaber, a little adventure turns into a whole lot of trouble . . . for Ania and her friends! Collects Star Wars: Legacy #1–#5—Prisoner of the Floating World."

Review:   I had a hard time with this one. I think a lot of it has to do with the time jump. This jumps up over 100 years from the last known books and characters I had previously read. This really threw me. For the first part of the story I had no idea the time setting. This book just jumps right in, not really expaining anything of what is going on on the planet or galaxy in general. I almost stopped for that alone but being this was Star Wars I was determined to continue.


My biggest confusion and utter perplexion however is the main character, Ania. Ania SOLO. The great, great granddaughter of Han and Leia. She lives a simple life and says she is nothing like her ancestors. Ummm....what was HAN?! Anyways, she ends up making a name for herself which is great. But what threw me is what line is she descended. Anakin didn't have any, Jaina was never said to have any and Jacen had a child but he did not go down as some hero by any means and his only child's parentage was secret. So I wanted to know where Ania comes from. What has happened since I last heard of some of my favorite characters?! I have no clue with this. I am left with so many questions right now and not the kind that have me eager for the next volume.

The story itself, once you remove all known information (or lack thereof) is decent. Not the best but not terrible. Ania really does a good job growing as a character. The art I enjoyed quite a bit. Dark Horse always seems to have some good artists. So on that level for being a comic, I am quite satisfied.

Will I read the next volume, yes. It is still Star Wars. Am I in a hurry for the next volume though? No. I can wait. In fact, I would prefer to read some actual books first that may shed some light on my many questions.