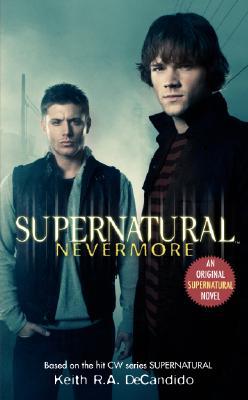 
Summary:  "Twenty years ago they lost their mother to a mysterious and demonic supernatural force. In the years after, their father, John, taught them about the paranormal evil that lives in the dark corners and on the back roads of America...and he taught them how to kill it.

Sam and Dean have hit New York City to check out a local rocker's haunted house. But before they can figure out why a lovesick banshee in an '80s heavy-metal T-shirt is wailing in the bedroom, a far more macabre crime catches their attention. Not far from the house, two university students were beaten to death by a strange assailant. A murder that's bizarre even by New York City standards, it's the latest in a line of killings that the brothers soon suspect are based on the creepy stories of legendary writer Edgar Allan Poe.

Their investigation leads them to the center of one of Poe's horror classics, face-to-face with their most terrifying foe yet. And if Sam and Dean don't rewrite the ending of this chilling tale, a grisly serial killer will end their lives forevermore."

Review:  Not a bad job on this novel, since it is based off a tv series. Being a fan of the series, I can be a bit critical about staying in character. I am used to movies based on books but this was the opposite. The tv series came first, then this.

This particular story sees the brothers to New York to help out a friend of a friend with a ghost haunting him, calling out "love me." While there, they take on another, darker case. Someone is creating a murder ritual to bring Edgar Allen Poe back to life... So we actually get two stories in one with this book!

While it was not great,and my rating a bit generous, the author did a fairly good job keeping the Winchester brothers in character. Sam and Dean were very believable, however the story and second characters don't seem to quite fit in too well. Also the writing style did not impress me and has serious room for improvement. Regardless, I was happy reading about my two favorite brothers. If you like the series, or just like supernatural stories in general you should check this out. A bit of action, comedic quips, ghosts...not to mention the famous Sam and Dean themselves.