The Summer I Became a Nerd by Leah Rae Miller (review) 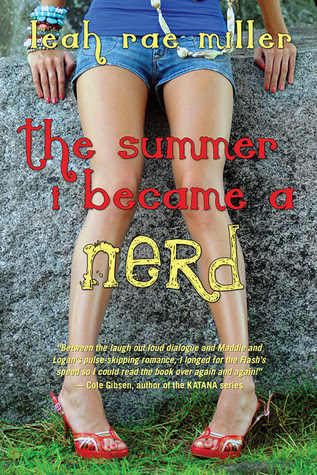 The Summer I Became A Nerd

Genre: Young Adult, Chick-Lit, Romance
Published May 2013
Pages: 267
Publisher: Entangled Teen
Buy it on Amazon or View on Goodreads
Summary: On the outside, seventeen-year-old Madelyne Summers looks like your typical blond cheerleader—perky, popular, and dating the star quarterback. But inside, Maddie spends more time agonizing over what will happen in the next issue of her favorite comic book than planning pep rallies with her squad. That she’s a nerd hiding in a popular girl's body isn’t just unknown, it's anti-known. And she needs to keep it that way.

Summer is the only time Maddie lets her real self out to play, but when she slips up and the adorkable guy behind the local comic shop’s counter uncovers her secret, she’s busted. Before she can shake a pom-pom, Maddie’s whisked into Logan’s world of comic conventions, live-action role-playing, and first-person-shooter video games. And she loves it. But the more she denies who she really is, the deeper her lies become…and the more she risks losing Logan forever.
Review:  Awesome and fun read! The Summer I Became a Nerd was the perfect read for the summer (although I am more than sure it is enjoyable year round) To anyone who has a 'nerd' or 'geek' side to them, this will most likely appeal to you. Especially girls and women being it is easier to relate to the lead character but guys, go for it! Leah Rae Miller has done a fantastic job bringing the Closet Nerd to life!

The story revolves around Maddie (Madelyne) who is a closet comic book nerd. After an embarrassing moment when she was younger, Maddie hides hoe love of cosplay/costumes and Comic Books and works hard to be in the popular crowd. This was so sad to hear. while I may not flaunt my nerdiness in front of certain people, I have never felt a need to hide it. This had me wanting to jump in the book and tell her that it is okay to be yourself and to move beyond what happened.

The other big player in this book is Logan. Son to the owners of the only local comic book store. He has been crushing on Maddie for a couple years and she soon finds herself drawn to him instead of her shallow boyfriend (the famed football star). When Maddie needs her latest comic fix and learns she has to wait several more weeks, she refuses that and takes a chance at the local comic shop. This leads to a series of events between her, Logan and their friends.

I kept finding to heart-rending how Maddie continually tried to keep her two realities separate. After her former best friend turning on her, she even keeps her current Bestie and even her parents in the dark. It really was so sad, and often annoying too, to see her struggle with it all.

I love Logan's character. Sweet, loyal and totally into Maddie. He know her better than she thinks but, even when it hurts him, he lets her call the shots. In addition the his comic books world, he also pulls her into a live-action role-play that he does. Now, I have done table-top RPGs but never live-action so it was an interesting take for me to read about. And, while it sounds often silly and like a lot of work, it also sounds fun! I loved seeing how into it Maddie becomes over time!

This book reminded me so much of some of my high school days with friends, goofing around. Very reminiscent at times. I think most people have a tendency to want to hide a part of that we think others close to us may find socially unacceptable. This books shows that it is okay to be yourself and that there are those who will still support you and care for you no matter what 'guilty pleasures' you may have.

This whole book is written in a relatively light-hearted manner with a few serious moments that rapidly draw the reader in then release for mor happy, ear-grinning reading. Lots of silly moments to enjoy here! This was a great blend of young romance, teen angst, nerdy moments and chick-lit. I will definitely have to keep an eye on this author for future books!

I received a copy of this book from Entangled Publishing in return for a fair/honest review!