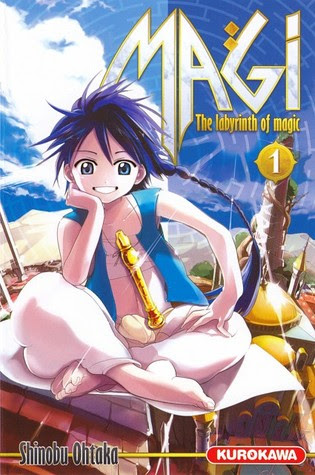 
Summary: A young boy, Aladdin, travels a mysterious continent that is home to a mysterious ruin known as the “Dungeon”, in which great treasure is said to lay hidden. During his travels, the young boy meets Ali Baba, and together they attempt to clear the “Dungeon” in order to claim the treasures within. As their quest brings about new encounters and farewells, Aladdin will come to learn of his true destiny.

Review:  A playful manga series based on the stories from Arabian Nights!
A fantasy adventure with a good blend of comedy. Great for older youth (ages 12+), teen and adult based on stories most readers should recognize! We have the ever famous Aladdin starring in this series With a magical flute that summons his friend, Ugo. Ugo is a shy, headless djinn. Aladdin is trying to help him recover his head and this book begins their adventures. Another famous name is given to us Alibaba who is hand for hire who wants to make it rich.


Aladdin can appear as an adorable little boy one minute, an intelligent youth the next or can seem to be a very pervy child. This gives Aladdin an interesting depth that leaves me curious to learn more about the real him in volume 2. Alibaba befriends Aladdin so that he will explore a dungeon for treasures with him. The way the dungeons are described remind me of old-school video game play.


Again, I love the various portrayals of Aladdin. In one scene he can be overly snuggly with some girl, the next, saving the day! While I love the different sides to him, they ways he can be drawn varies a bit too much. He can look 4 years old on one page, 10 on another and around 14 on the next! Too many styles were used in this manga, making difficult to decide if I like the art style or not. And for graphic novels, artistic style is just as important as the story in my opinion! Also there is unnecessary narration that I could have done without.

There is a character we meet you seems to know something about Aladdin but we don't learn much in this volume so I am eager to learn more of him in volume two. Overall, the book has some amusing parts and a playful yet beloved storyline that I am curious to see where it leads. Fans of the original Dragon Ball series will likely enjoy this series as well.

I received this book from Viz Media in exchange for a fair/honest review.  All opinions in the review are my own.  No money/other gifting was offered/mentioned/etc.