Dark Souls Book Tour with review, except and Guest Post! 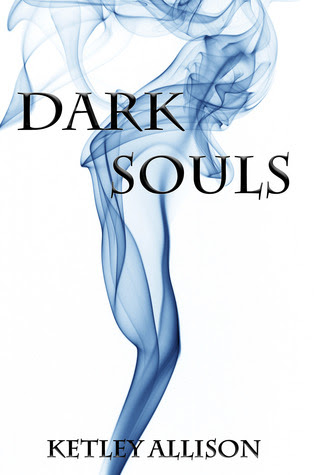 Summary:  "19-year-old Emily desperately wants a name for what she is. For what is consuming and torturing her. For what is changing her.

Emily may not be as crazy as she thinks, because her body is no longer her own. Something is stirring inside her. It is soft, seductive, and tells her what to do to survive. As Emily learns that her world has been infected by demons that consume human souls and fit seamlessly into the bodies they empty, she must also accept that she is one of them. Yet, she is different from the rest, because her darkness didn’t inhabit her, it was awakened. And it doesn’t just want the humans."

My Review:  Great start to a series. Ketley Allison has a great debut novel here! The main character, Emily, is a young woman trying to make it on her own in the big city. While her best friend, Macy (who seems a bit shallow at first but grow on you), is living an easier life of college, parties, etc, Emily is stuck working two jobs just to struggle still to make ends meet.

One day, Emily's life is flipped upside down when Macy's boyfriend transforms into a monster and attacks her. Yet something inside Emily knows how to handle it and soon he is dead. When Macy friends Emily she is alone. No body, no blood...nothing. Emily soon finds herself in a world full of demons. One such demon tells her she is one of them. Or is she? For Emily can do more than other demons...

Emily also meets Asher, who she is drawn to, an his sister Gwyn. These two have secrets of there own. I must say, I could not stand Gwyn. She is just plain cruel and nasty! Asher on the other hand I couldn't decide one way or another. Being the book was all from Emily's perspective it was a little jaded. While there is a romantic element, there is no major romance in this book which was nice. While I wanted them to try and be together, it was sweet to see nothing was rushed for it, especially with everything else going on.

I felt really bad for Emily. Certain people knew more than they were sharing with her as she tries to learn about herself. I could not imagine going through what she goes through all alone. Although this is partly her own fault as she too is not truthful with others. Guess honesty is a two-way street here.

The book started off a bit slow for me and it took awhile until I could get into it. Yet once the pace picks up it doesn't slow down again even for a minute. It keeps you guessing who or what Emily is, dropping partial hints throughout the book. It was a fun thing to do while reading. Yet none of the hints give everything away, so you aren't stuck fully knowing what is going on until Emily herself learns the truth.

The ending left me sitting still, starting at the book, willing there to be more. While the book answers the questions needed to finish, it easily leaves things open enough for a second book. This is a great book for older teens and adults alike.

My eyes narrowed, unsure if I possibly could have seen what I thought I had seen.


It was only for a millisecond, but his eyes had shifted strangely. One minute they were his normal soft green, and then suddenly and inexplicably, they flashed yellow, his pupils shrinking into slits. I blinked, and his eyes were back to normal as they studied me quizzically.


“Something wrong?” he asked. His eyes flitted back and forth between mine, scrutinizing me. “You okay?”


“I really don’t know,” I said, concerned over this potential mental break from reality. “Are you okay?”


I searched his eyes, my mind not quite catching up to what my eyes were seeing.


“You’re…” I didn’t even want to say it. I just saw snake eyes on him, for god’s sake. My thoughts weren’t exactly credible at the moment. “You’re not hitting on me, are you?”


His very normal-looking eyes widened for a moment. “Oh—no. Shit, right. No.”


I jerked my chin back, appalled by everything that was happening right now.


“How about we go back downstairs?” He asked, running a hand through his hair.


Rob continued to look at me with concern, his eyes still normal as they rested on my face, and I immediately felt stupid.  This was Rob, for crying out loud. He walked around like a doe-eyed deer half the time and could barely kill a spider without his eyes welling up. Subconscious manifestation or not, imagining snake eyes on Rob was like imagining Macy wearing plaid flannel pajamas to class.  Not to mention the absurdity of the thought that he was actually hitting on me. No way. Not nice, endearing Rob, a guy who only had eyes for one girl.


On cue, my phone buzzed in my purse. I pulled it out, already knowing what it would say.


Macy and I had a code that we used whenever we got separated at parties: either we were involved in something that wasn’t good and needed rescuing, or we were up to no good and didn’t need any help at all. Macy was usually the latter.


Neither, I texted back, horrified at the thought of actually doing anything dastardly with Rob, especially considering our current circumstances. Coming to find you.


“Okay, let’s go,” I said to Rob, shoving the phone back in my purse. I began to walk, but immediately stumbled on the cracked, uneven rooftop. Even in bare feet, I was a klutz in a dress. “God, how did I even get over here without tripping?” I asked, mostly to myself.


Rob came up beside me and cupped my elbow to lead me through the dark, but as soon as he laid his fingers on my skin, a searing pain like nothing I had ever felt before spiked through me. Before my brain could even process the pain and tell my body to flinch away, Rob moved with such superhuman speed that my eyes could barely track him as he flew to the other side of the rooftop, his body curving against the stone barrier. At the same time that my mind screamed at me that this could not be happening, he actually peeled back his lips and hissed at me.

How To Keep Your Writing Characters Different

This is a tough topic, because every writer is automatically different. We all have our own unique style of writing, but there are definitely some habits that a lot of us fall into. First, I want to say that this post isn’t meant to criticize anyone. I am merely talking from my own perspective and experience—and here we get back to the toughness of this post, everybody’s different! But, in my writing, I did notice a few things my characters did that I definitely tried to correct. Hence the change in this post title J

My heroine’s habits. Eye-rolling, lip-biting, cocking out a hip, to name a few. I noticed that a lot of characters do this, and I understand why. We need to cue the reader through action instead of just writing, very annoyingly, “Emily isn’t comfortable right now and wants to walk away.” And I also understand why we as writers automatically use these actions—they’re just so habitual! And perfect in enunciating our point. But then, it keeps happening. All of a sudden your heroine has chewed her cheek off and given herself a chronic eye-ache.

My hero’s habits. Leaning against things, clenching teeth, forming hands into fists. In short, being mysterious, cocky and sexy. The same problems arise as my heroine: it becomes habit, expected, slightly annoying. Now, I’m not saying I’m perfect here. I guarantee you will find these habits at least three times in my book. But I tried to use different actions so I didn’t make it so expected and so unnatural (because let’s be honest, how many guys do you know who lean against doorframes every time they talk to you?)

So the question is, then, how do we make our characters different? I found the answer to be surprisingly easy. So easy that I’m sure many writers already do it and this isn’t anything new: take habits from people you know in real life. I learned this long ago, in some book on writing that I can’t remember now, but it’s been with me ever since and it has absolutely made my characters better.

If you take habits from your friends or your family, you’ll be surprised how real your characters become. I’m not even talking complex things—I mean simple, barely-registering-on-your-radar type things. For instance, my character Macy hates coffee and only drinks hot chocolate, a trait taken from my best friend. Another example (one I haven’t used yet, but may one day) is the fact that when my brother eats Lucky Charms, he picks out all the grains so only the marshmallows are left and calls that breakfast—and he’s 28 years old.

See what I mean? All of a sudden your characters have these normal yet unexpected quirks, making them more personable, and most importantly, making them more realistic. Your readers will be drawn to them more, and if you’ve really done it right, they’ll like them more—even love them!

Ketley Allison is a twenty-something (maybe almost thirty-something) author who believes that supernatural love shouldn't stop at eighteen. She began her career by writing books as birthday presents for her friends (with her friend as the main character and opposite a super sexy lead, of course) before ending it in order to walk down a path she thought she was supposed to follow.

The writing bug never left her--and, in fact, would often bleed into the official papers she was supposed to write--so now Ketley's putting down her suit and finally following her dream. While her friends are no longer the stars of her books, she still throws in bits and pieces of them into each and every one of her characters.

As a result, her books tend to focus a lot on friendships as well as love, because let's be honest, friends are what really get you through--especially when your epic love turns into epic heartbreak.