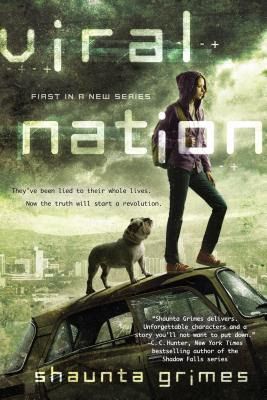 
View on Goodreads.
Summary:  "After a virus claimed nearly the entire global population, the world changed. The United States splintered into fifty walled cities where the surviving citizens clustered to start over. The Company, which ended the plague by bringing a life-saving vaccine back from the future, controls everything. They ration the scant food and supplies through a lottery system, mandate daily doses of virus suppressant, and even monitor future timelines to stop crimes before they can be committed.


Brilliant but autistic, sixteen-year-old Clover Donovan has always dreamed of studying at the Waverly-Stead Academy. Her brother and caretaker, West, has done everything in his power to make her dream a reality. But Clover’s refusal to part with her beloved service dog denies her entry into the school. Instead, she is drafted into the Time Mariners, a team of Company operatives who travel through time to gather news about the future.

When one of Clover’s missions reveals that West’s life is in danger, the Donovans are shattered. To change West’s fate, they’ll have to take on the mysterious Company. But as its secrets are revealed, they realize that the Company’s rule may not be as benevolent as it seems. In saving her brother, Clover will face a more powerful force than she ever imagined… and will team up with a band of fellow misfits and outsiders to incite a revolution that will change their destinies forever."
Review:  Well done, Shaunta Grimes. This is the first book I have ever read by her, and I don't plan on it being the last!

She quickly draws you in with a great prologue where a virus has broken out and most the the US population is dying. Suddenly there is a cure! But for many, it was too late. Each state was reduced to a single city worth of people. In the state of Nevada, only 20,000 remain, many of them children. Yikes! What a way to start, right?

Jump up 16 years to young Clover (16) and her older brother, West who is her guardian. These are our main characters and they are very well done. The relationship is strong and easy to relate to. Clover is autistic and the author did a superb job capturing that. The lack of touch, need for space and quite. The reactions to sudden movements, etc. Due to the autism she has a dog, Mango, who is just the sweetest thing and I want to take him home myself.

The world is vastly different and well done as a post-apocalyptic society. With a cool twist. Certain people can go two years into the future to see what is happening. It is how the cure was found in the first place. They go to the future for updates and to learn and crimes to stop them before they happen. Soon after Clover ends up being one of those that go into the future, she and West are given some shocking news that he will soon be killing someone. Clover is also visited by a young man who gives her some odd information that changes everything she knows about the cure, the company and the very world she lives in.

While I enjoyed this book, I did notice some small plot discrepancies that I hope will be explained in the next book. Also I really, really wanted to know about the rest of the world. Was this a US only virus? If so, why? What about Canada or Mexico especially since they are right next to the US? Nothing. The only reference we have is in the plot summary but nothing in the actual story. To me, that was important to the world building an a fairly big miss.

So beside the above mentioned flaw, I found this book to be quite well done, relatively realistic to follow, great characters and concept. I hope the next book brings out more of the other characters, such as Leanne, Jude, etc more. This was not a book easy to put down. Once you start, you just want to keep going. The pace is never ending. We are constantly being feed more pieces of the story and this world. It leaves you craving to know what will happen in the next book.

Special thanks go to Penguin Group through Netgalley for my original eCopy. Right after I requested the title I also won a print copy on Goodreads, hosted by Marissa. So lots of thanks to everyone for these! Book was given free in return for a fair and honest review.

What do you think of the book?  Or what is a favorite dystopian book you have read?