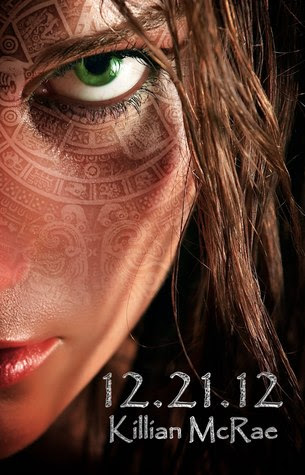 
Archaeologist Sheppard Smyth has staked his career and the honorable memory of his wife and partner on proving his widely panned theory: Cleopatra VII, the last sovereign pharaoh of Egypt, was not a victim of suicide as history suggests, but of a well-concealed murder. When a statue of the doomed Queen is unearthed in a pre-Columbian excavation site in Mexico, Shep rushes to investigate and, hopefully, find the proof that has evaded him for so long. The statue, however, is only the first clue suggesting a mysterious connection between Mesopotamia and Mesoamerica, and possibly - beyond. Suddenly thrust into the heated rivalry between sexy and enigmatic antiquities thief Victoria Kent and the infamous Russian mafioso Dmitri Kronastia, Shep finds himself a common pawn played by forces working to see out a quest older than the pyramids and cloaked in the Mayan Doomsday prophecy of 12.21.12."
Review:  Overall, I enjoyed this book. It was an interesting variety of genres. Mystery, mythology, science fiction with an 'end of the world' twist. Killian McRae blended many concepts, both new and old and created an original story worthy of some praise.

The book centers around several characters.W e have Sheppard Smythe (known as Shep) an archeologist who lost his wife in a traffic accident in Egypt and is called in to assist on a dig site yet gets caught up in some trouble beyond what he could imagine. Victoria who seems to be an assistant at the site but may be a criminal, and even rumored to be a goddess. Then there is Dmitri, a supposed Russian mob lord who knows more than what one might think. Each character is closely intertwined to one another, along with other characters in more ways than any of them realize. Each of them hold a piece of a puzzle that leaves the reader guessing until the end.

The book is written from different perspectives as the story moves along. Sometimes this added to the story. However it also left questions to the characters themselves at times and why they thought or acted the way they did. Certain behaviors, especially Victoria's feelings, seem awkward or inaccurate at times. I also wish there was more detail to the surroundings, such as the dig site and other places the characters stayed.  While the book is enjoyable one major thing lacking is a lasting effect.  When I finished the book I was quickly able to move on to the next story on my shelf.  I like  wanting to take the time to think on the characters and plot.  This one didn't have me doing that much for some reason. I cannot say why.  Yet regardless of these desires I truly enjoyed the story in and of itself.

*I received this book as a Free copy from the Goodreads First Reads giveaway program. Special thanks to the author for offering up a copy of her book!