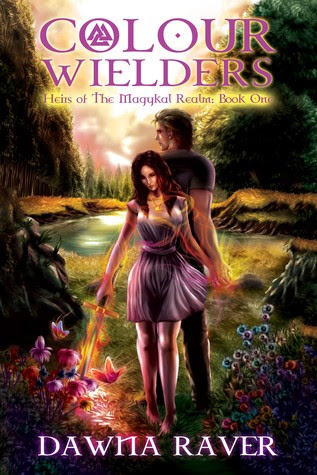 Summary:  "Behind the Faerying Mysts, hidden from Mortal eyes, is a land where gods and creatures of myth and legend dwell. And in the Mortal Realm, their Princess is hidden away.

Quinn Sinclair lives an ordinary life with her less-than-loving mother in Conifer, Colorado, clueless of her true nature. On the night of her birthday, a staggering betrayal sends her life spinning out-of-control. As she struggles to pick up the pieces, a vision of a man with haunting tourmaline-blue eyes begs her for help, and she is transported into a Magykal battle-forever changing her life.


Arik Morgaine-Demigod bad boy and outcast of the Magykal Realm-tried to avoid contact with Princess Quinn for eighteen years, not wanting to make good on an old threat. But the fates have other plans. Arik can no longer deny his growing desire for Quinn, or the need to protect her from those wanting to control her burgeoning powers. Can the two of them come together and save the Magykal Realm from being destroyed by the Darkest of Magyks?"

**Goodreads has the first chapter available to preview**

Review:  A most enjoyable fantasy! However, I would like to state right off that this is not a YA novel. Content is definitely more appropriate for mature audiences. So while the cover may look sweet and innocent, this book is not.

This story has several key characters, but the perspectives are with young Quinn, a 22 year old who has been rushed into a whole different reality, and Arik, of the Magykal Realm. This book kicks us into high gear right from the beginning with the end of a sex scene that quickly becomes quite violent for Quinn. Soon she is left questioning who her father is, who she can and can't trust and more.

Then there is Arik. I love his character. The good guy with the chip on his shoulder and can therefore easily come across as the bad guy. I almost always love that character complex though. Arik has been around for quite a while and seen his share of good and evil. Yet ties with family and friends have been tested over the years and now he tries to stand alone, both sides wanting him. But want Arik wants is Quinn, and he feels he can't have her.

Yes, there is also some sweet (and not so sweet) romance here too. Although the romance is why I am not a big fan of Quinn as well. After being used by a changeling at the beginning, then falling for a Highlander named Devin (under an influence but still) within a day, then literally hours after making out with him, she plasters herself to Arik. Tricked or not, she burns through the men WAY too fast for me.

Anyways, in this story we also have Loki (yes THAT Loki, trickster God), Morgana Le Fey (from the stories of Merlin) and other wonderful characters both common and original. Dawna Raver did a great job breathing (or writing I should say) life into each character. Various personalities, stories, expressions, and styles of speech made them all endearing.

Lots of myth and Celtic references, a bit over the top, especially when it isn't English. Also, while I liked how the story draws you in right away, the first few chapters is just too much to process right away. Also, time lines seem a bit jumpy but there are two realms so that may be causing it, I just don't know.

Otherwise, I really liked this. Each characters had different motives and purposes. Some good, others less so. The cool thing is, you never fully know who is going to be good or what secrets some of them have, until the end. The author does a great job to keep the reader wanting answers, but withholding just enough to keep them going. Also the use of colors to determine energy, health, emotions, etc I thought was very neat. And often pretty to hear described. I would have loved to see things through Quinn's eyes the first time she sees them. I look forward to the next book in this series!

Special Thanks to Curiosity Quills for the chance to read this Arc/Galley.  *This book was given to me in exchange for a fair/honest review.**