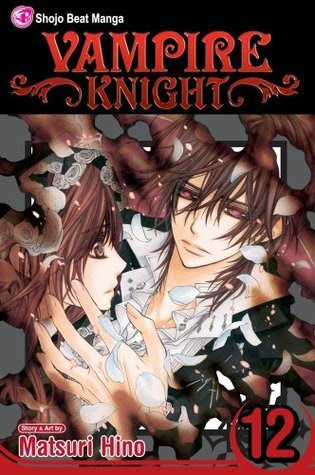 Summary:  "It's been one year since Yuki left Cross Academy with Kaname, and tonight is her first vampire soirée as a pureblood. Her best friend Sayori has snuck into the party to see her, but will Yuki and Zero be able to protect a human girl amid a bevy of vampires?"

Review:  So, this story has some redeeming qualities to it. After the last few books left me oh-so disappointed, it took some time to bother grabbing this one.

*Warning* Spoilers ahead if you have not read previous volumes!

This volume picks up full swing at the vampire Soiree. It is the first time in a year Yuki has been out. A chance to be introduce to her new-found status. And a chance to see Zero. Ahhh, Zero. I really felt for him before but his character is running dry for me. Is it that I have had enough angst with him or how he is reacting or how he seems o be losing any personality? Not sure. Some mix of those. On the flip side, I really like Yuki in this one. She is showing some of you old spunk once again and even defies Kaname's wishes. Go Yuki!

we get to know about the pureblood Sara who thus far annoys me. Yet I think she is being set up for that so I can't fault her. Also we briefly meet another Pureblood (They're coming out of the woodwork!) and learn a secret of Yuki's adoptive father,the headmaster at the academy!

So a pace pick-up and a slight chance at a possibly new intrigue has improved my option on this series a bit. Still not nearly as good as the earlier volumes but we have another 7 volumes to go!