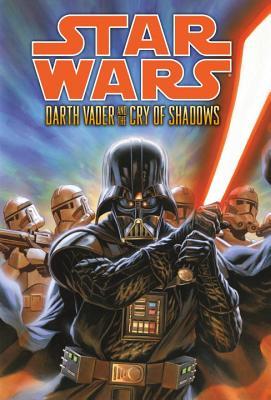 Star Wars: Darth Vader and the Cry of Shadows

Summary: "After he is left for dead during the Clone Wars, a single trooper comes to hate the Jedi who abandoned him. Years later, he hears of a great and powerful warrior--the hand of the new Galactic Empire, Darth Vader! Seeking to serve the Dark Lord, this man, Hock, becomes a stormtrooper and works to gain the respect of Vader. During a mission against a group of remnant Separatists, Hock finds himself fighting side by side with Darth Vader, and the bitterness that had grown inside him is brought to rest." -taken from goodreads

Review:  A fast paced comic. Perhaps too fast in my opinion. We have an angry Clone trooper who was 'abandoned' by the Republic and he is forced to survive by other means. When he is finally off planet, the Empire is now in charge so he joins up with them in his admiration for Darth Vader.

I could not connect with characters in this graphic novel at all. The narration was dry and broken. Most of the book I felt as though I was simply reading a list of bullet points for a plot outline. In the end, very little came out and I was left feeling hallow. The concept has a lot of potential, especially as he gets to know Vader's true character. yet the bland script and jumpy images failed to portray that.

I think Vader was reasonably portrayed but original character creation needs a lot of work. The artwork was okay, but the panels did not flow together well on several occasions.

*I was loaned a digital copy of this graphic novel in exchange for a fair, honest review.*