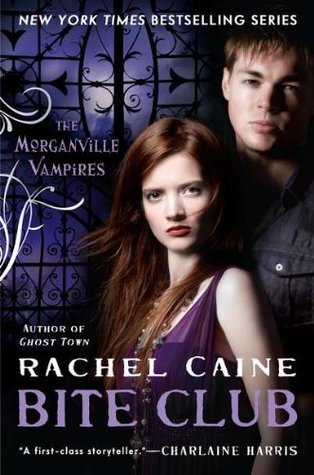 Summary: "After discovering that vampires populate her town, college student Claire Danvers knows that the undead just want to live their lives. But someone else wants them to get ready to rumble.

There's a new extreme sport getting picked up on the Internet: bare—knuckle fights pitting captured vampires against each other—or humans. Tracking the remote signal leads Claire—accompanied by her friends and frenemies—to discover that what started as an online brawl will soon threaten everyone in Morganville..."

Review: I love this series but this book really showed me some points I liked more than previous books and some I liked less. The drama within the Glass house reaches all new heights in this book. Everyone has secrets from one another and not all of them are good!


In this book a new gym has opened up where a vampire is training humans and vampires alike. One thing I must say is that it must be HUGE. We get all the standard gym setups for weights, cardio, etc. We have boxing areas, ratchet ball, karate mats and even a fencing room and more! I would love to have a gym like how this appears in my city (less the vampires). Shane is one of the first to check it out and gets really into the fighting there but when one fights under vampires, bad things can follow.

Claire is told some startling information but is heavily threatened to keep quite about it. Frank Collins is still being kept a secret, Shane is drifting away and even Eve and Micheal have a secret! All this adds up to lots of drama and home intrigue as a I wonder how it is all going to come out.

While this book is mostly focused on Claire (as all past books have been), we get something new that I loved. We get a first perspective look into Shane's thoughts! While they are very warped in this book due to other factors I won't give away, it was an interesting new aspect to the series I highly enjoyed and hope to see again in future books of the series.

One thing that is really being to annoy me are the idioms and text speak being used on a regular basis. I loved how the earlier books had a more mature aspect to how they spoke but now its getting annoying with the slang used. I used to love Eve but with how she was talking in this book, she is now the type of person I would avoid hanging out with. She is not 14-16 years old yet acting like one. It is annoying when a character changes like that and this in one change I do not like at all and cost a fair bit of enjoyment for reading this.

With all the tension from the secrets I was expecting some interesting scenarios later in the book but i felt a bit let down in the end. The grand show was lackluster, Claire didn't seem to learn anything and no one asked questions about things that did not add up, they all just went along with whatever was going on! Grr!

So overall, good story with fun potential. Some interesting character comebacks. Drama-filled but the last 20% of the book could have been better. Here's hoping the next book is better and Eve goes back to her old kick-but, goth self!