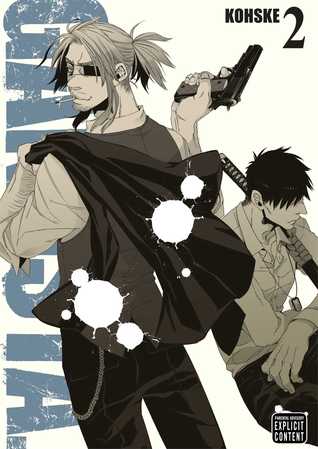 Synopsis: The Handymen, Nic and Worick, ply their trade in Ergastulum, a city run by the Mafia and ruled by violence. Recruited into a battle with a gang, they find themselves up against one of the “Twilights,” mercenaries with superhuman abilities generated by dangerous drugs. Nic, who is also a Twilight, fights back with the same savagery and skill—until Worick has to step in to save him from himself. Partners and equals now, in the past they were anything but, yet both men are bound together by the chains of a tragic past as they face an uncertain future.

Review: We finally get a bit of world building in this volume. Not a lot, mind you. But some. We get a further look into our main characters, Nic and Worick . I liked getting a real look at what their life is like. There is still so much I don't have yet. But we get some interesting ground rules for the Twilights. Worick took on a bit more face time in this one which was nice as I didn't get much of a feel for him at all in the first volume.


Still, a bit let down with the vague levels of information. And the worst part is that once I stop reading a volume, it doesn't stick. It isn't memorable. I can't even write a proper review! I made these notes but even they aren't drawing many memories. And that saddens me. This is a series that seems best to read close together, without much time between volumes. An interesting read, to be sure, but nothing special either.