Anyone who knows me can vouch for my being a Star Wars fan.  I was flat out obsessed in middle and high school.  I originally saw the movies (the original trilogy) in about 4th or 5th grade and REALLY liked them.  They were the reason I fell in love with the sci-fi genre.

In sixth grade I was in the library and saw a book titled Star Wars: Young Jedi Knights: Shadow Academy.  So I figured, "why not?" 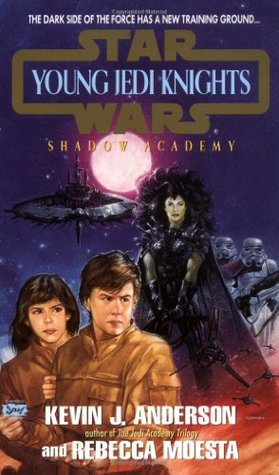 I fell in love! I loved the new situation and characters!  Especially Jaina Solo (daughter of Han and Leia).  I even used her name on forums and social sites (Twitter is @jljaina).   I started saving my rare allowance earnings just ot collect all the books available.  When they re-released the original trilogy and started to show the new movies at theaters, I saw them all on opening day.  My dad even pulled me out of school for one of them (and he never even let me stay home when I was sick unless I was throwing up).  Jaina, Jacen, Zekk, Mara Jade, Kyp Durran, etc where my best book friends.

I knew Lucas planned on 9 movies, and I eagerly anticipated the last three.  I was always a bit worried with all the books, how things would turn out.  But since he okayed their publications, I figured they must at least somewhat fall in line with his ideas.  Well most of them.  Some of the series (Looking at The Galaxy of Fear and Jedi Prince stories especially) were a bit further out than others and did not fit with any other books at all.

WARNING!!! If you have not read the books or seen the FORCE AWAKENS, there are some spoiler points ahead!

Now I did not always like directions the books went, character deaths or pairing (I am so not a Jagged Fel fan).  Some authors did some things that seemed totally left field of previous books.  But for the most part, it worked.

Then  Lucas sells out (I am still SO pissed about this).  Disney takes over and says the expanded universe is done.  No more publishing, no finishing series that authors had planned to right.  I will never know what happened with some characters.  Years of reading and living through them and POOF!  They don't exist.

Now JJ Abrams has taken over and created all new characters.  Finn, Rey and Kilo Ren.  Han and Leia aren't together, Luke doesn't have the Academy on Yavin 4, and Jaina, Jacen, Anakin, etc...nope...  Yet there are easy to spot parallels between the two.  Kilo Ren is Han/Leia's son who falls to the darkside (Jacen did too).  His name was Ben (the name of Luke's son in EU). Rey is somewhat similar to Jaina.  Other similarities too, but I will have to wait for the other movie to see how they play out.  Plus I don't want to spoil everything for non-readers, or movie watchers.  I think I did enough.

I don't know if this makes the movie better or worse.  I am so conflicted about it.  I feel less like I lost the characters, yet also like they've been defiled.  Their was no real end to the original characters so hanging there.  I was excited to see Lucas's dream come to a conclusion but he sold out and has said Disney wrote and created final movies, that they were not his ideas.  So what would he have done?!  I want to know.  I want the books to be able to continue.  Can't we just change "expanded universe" to alternate universe? I want to read what Christie Golden had planned for Jaina Solo.   I want to better understand what happened leading up to the Legacy books (I only read 1 of the comics but there is a huge time and character jump).    This non-existence is worse than character death!

Now I am not saying the movie was bad (it was better than I expected, all things considered) but after all these years of books, just to be told "NO" it sucks.

I would love to know your thoughts.  Be careful reading other comments.  Spoilers may be mentioned and I intend to respond.