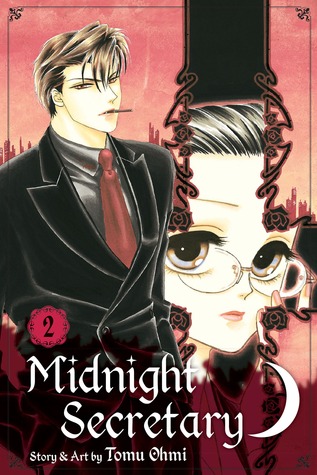 Published: Nov 2013
Published by Viz Media LLC
Pages: 200
Summary (taken from Goodreads): Kaya thought she had found the perfect job when she became the private secretary of Kyouhei Touma - the director of a tableware company of the same name. Kyouhei is a capable director, but his arrogance and sluttish behavior are almost legendary. Kaya is doing her best to prove that she is capable in her work, but one night, by accident, she discovers his secret... of him being a vampire!
Click here to see my review and learn more about Volume 1
Review:  This manga series is for mature audience readers only. Oh my! While the last volume has some mature content this one is much more geared to adult manga fans. Office, vampire romance here we go!

In this volume Kaya is coming to terms with her feelings for Director Touma. However when his brother confronts her about it, her emotional turmoil over him causes her to change positions in the company. Kyouhei Touma sends her on such a roller coaster. He is cold toward her one moment yet desiring her blood the next. I must give Kaya some due credit. she puts up with him and all his issues and still maintains her duties as an amazing secretary.

Like I stated above, this series is ramping up the sexual content. So steamy scenes will occur! I love the artwork and how the characters are drawn. Their expressions and body language says so much into the story!

I must say though that the sexist roles taken get a bit annoying. The expectations of secretaries, the fact that they are all females and all board members, etc are men gets frustrating. So I was less than a fan about the stereotypical roles shown of everyone.

Overall, this is turning into an interesting series. Not sure how long it will last. The plot seems to indicate only a few more volumes but we shall see if more depth is presented in future volumes.

I received a review copy from Viz via Edelweiss. All opinion expressed in this review are strictly my own.