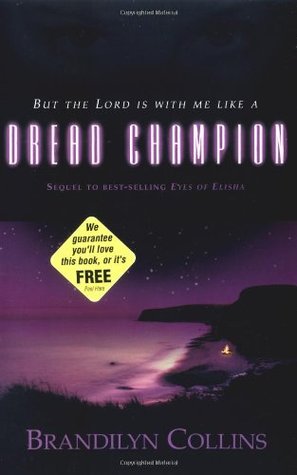 
Pages: 413
Summary (taken from Goodreads):  "Chelsea Adams has visions. But they have no place in a courtroom. As a juror for a murder trial, Chelsea must rely only on the evidence. And this circumstantial evidence is strong---Darren Welk killed his wife. Or did he? The trial is a nightmare for Chelsea. The other jurors belittle her Christian faith. As testimony unfolds, truth and secrets blur. Chelsea s visiting niece stumbles into peril surrounding the case, and Chelsea cannot protect her. God sends visions---frightening, vivid. But what do they mean? Even as Chelsea finds out, what can she do? She is helpless, and danger is closing in. . . . Masterfully crafted, Dread Champion is a novel in which appearances can deceive and the unknown can transform the meaning of known facts. One man s guilt or innocence is just a single link in a chain of hidden evil . . . and God uses the unlikeliest of people to accomplish his purposes."


Review:  Brandilyn Collins had created a great sequel to Eyes of Elisha. Chelsea is once again involved in another murder mystery. This time though, she is on the jury. This book does a wonderful job bringing in the court aspects, mixed with mystery, intrigue and several unexpected twists and turns.


No one wants Chesea in the courtroom. Not the lawyers, her fellow jury members and especially not herself. Yet stuck there she is. Most think she is crazy with her visions. And this time, not even she knows what to make of them. The evidence is all there, pointing it's ugly finger at famed Darren Welk. Yet her visions do not match up. She wonders what God is trying to show her and what can she legally do about it. A wonderful mix of faith and the walking the line of man's laws.

I loved hoe the courtroom plays out and how the jury experience goes. After being stuck on a two-week case myself recently I can say it is very accurate. Things are going smooth on the case, until the threats roll in. Chelsea is pulled away from her home and visiting niece who starts to get a bit to close to the accused son for Chelsea's comfort.

The intrigue in this book is very well played, slowly adding layer by layer to the plot. And the end result is such a wonderful twist! I highly enjoyed this novel! This is Christian Fiction/mystery-suspense the way it should be!"