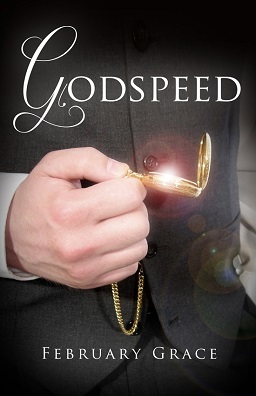 Official Summary:  ""What is a heart if not the ultimate clockwork?"

Abigail’s young life was saved by the kindness of strangers: Schuyler Algernon, the man who found her collapsed on cold city streets, and Quinn Godspeed, the doctor who risked everything by breaking the law to keep her fragile heart beating.

As the truth about what she’s become and her feelings for her savior overtake her, Abigail is forced to ask what constitutes life, living, and what dark secrets are contained within Godspeed’s past and the walls of Schuyler’s house."

Review:  This was a slow, sweet historical novel with a bit of romance and a slight dash of steampunk. While not at all what I expected, it was very enjoyable nonetheless.

Our protagonist in this story is a young woman who has lost her father to a rare plague, and suffers some severe side effects herself from this same plague, is removed from the only home she has ever known and is left wandering the streets of the city when her ailment causes her to lose consciousness. She wakes up in the care of Schuyler who calls in his friend, the mysterious Dr. Quinn Godspeed. Days (weeks?) later she awakens to find herself attached to a machine that is keeping her heart pumping.

Due to her condition and the device keeping her alive she is stick living with these two men. She soon meets other patients of the doctor. Penn who has hearing loss, and 3 other teens of various conditions. This group of youth call themselves 'The Freaks.' and soon she finds herself and part of a family to the teens and the two older men of the house.

Our main character (who refuses to share her name) is obsessed with the doctor. She falls in love with him but the books gives us so little about her that I felt it was more obsession than love, especially as she felt so strongly the moment she laid eyes on him. Due to her love for the doctor she strives to learn all she can about him. Why must she never venture outside, why does no one speak his name and why are there rumors about him killing himself? Her investigations give her great insight into the lives of each character in the book and some things she learns are darker than she may like.

This story is beautifully written. The story is smooth and has an almost wistful feel to it. The descriptions and emotions felt are rich and invoking. A few plot holes and consistency errors but the story was still sound (ages of the other teens being one). We never learn why she refuses to tell the others her name or her past (although the summary spoils her name for us). I kept hoping there was some connection or reason but no there were none. Also, I wanted more steampunk! The device she uses and the mention if airships are the only indicator we have. Otherwise is was a sweet story, with a twist at the end. Slow at first but the last quarter of the book is impossible to but down!