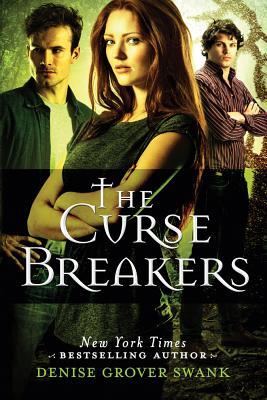 The Curse Keepers:  The Curse Breakers (2)

Official Summary:  For more than four hundred years, the Curse Keepers guarded the barrier between the human and spirit realms. All that changed the day Ellie Lancaster met Collin Dailey. Prophecy demanded they defend the world from evil?even as it ignited a passion that threatened to consume them both.

Now Ellie faces a frightening new life, abandoned by the man she loves and tormented by malevolent spirits unleashing their vengeance upon the earth. Her only shot at protecting humanity?and herself?from the demon scourge is to claim the mark of the god Ahone as her own. Finding it means trusting Dr. David Preston, a handsome professor of Native American studies whose skepticism is surpassed only by his attraction to Ellie. Together they must finish what the Curse Keepers began, defying the forces of darkness to face hell on earth?and unlock the truth of Ellie's destiny.

Review:  Warning: If you have not read the first book in the series, this review contains spoilers! You have been warned.

A substantial improvement from the first book. Ellie has her act more together in this book. She is actively looking for answers on her own. Her attitude in the first book about drove me batty but here she is more realistic in what she is doing.

She is still pissed at Collin for his betrayal, yet still drawn to him. Honestly, what she sees in him, I have no idea. Sexy good looks does not make up for a lousy, lying, manipulative personality. In addition this book introduces another potential romance for Ellie. While normally I am not a fan of love triangles, this one makes some sense at least.

The police officer Tom is a much more active role in this book. He wants to help Ellie but is also determined to get the truth. Then there is David (her new interest), who holds lots of knowledge and resources to point Ellie in the right direction.

The plot thickens as Marino steps up his game, spirits want to kill her out of vengeance and Okeaus has some sinister plan afoot and Ahone is silent and unhelpful. What is a girl to do?
I enjoyed this one so much more than the first. I love how the author is tying everything together and it has me most curious for the end results. This book is much more plot focused which I appreciate.

*I received a copy of this book in exchange for a fair and honest review. All thoughts and expressed opinions are strictly my own.