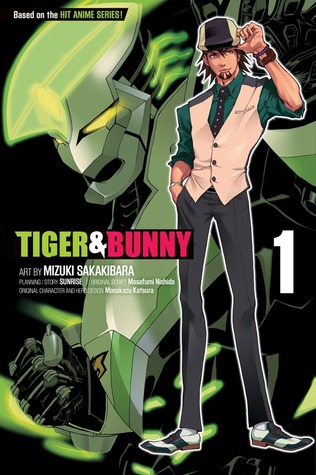 
Pages: 168
Published by Viz Media
Summary:  "Superpowered humans known as NEXT appeared in the world 45 years ago. Some of them fight crime in the city of Stern Bild while promoting their corporate sponsors on the hit show “HERO TV.” The people love their superheroes, even if they don’t completely understand them, and not all of the NEXT use their powers for good.

Veteran hero Wild Tiger has years of experience fighting crime, but his ratings have been slipping. Under orders from his new employer, Wild Tiger finds himself forced to team up with Barnaby Brooks Jr., a rookie with an attitude. Overcoming their differences will be at least as difficult for this mismatched duo as taking down superpowered bad guys!"
Review:  I was hoping to enjoy this more than I did. This manga seems much more geared to children ages 7-12, even though it says it is a teen manga.

We have two main superhero characters that share the same superhero power. One is more experienced but seems to be less popular, the other is the up and coming rookie. I felt both it be shallow characters that come across as more interested in their image than actually helping people. Luckily they redeem themselves some as when there is a real threat they can put aside differences and work together. Sadly though, the story thus far is too predictable for me to get into. On the plus, there is some good action and silly comedy. My younger brothers would likely enjoy this series far more than I did.

So while this was not a hit for me, it does not mean it is a bad series. I just felt that for a "Teen" manga it could use some improvement and be a bit more inclusive for older readers. While reading, I couldn't help but remember my own childhood with Power Rangers being popular. That is what this reminded me of in some ways. A few mature plots attempts but still overall, the story just seemed too immature. It is like trying to watch Sesame Street, Dora, Backyardigans, etc as an adult. No thanks. I'll just leave it to the kids to enjoy alone.

I want to thank Viz Media (via Edelweiss) for the review copy of this manga.  All opinions and thoughts expressed are strictly my own.