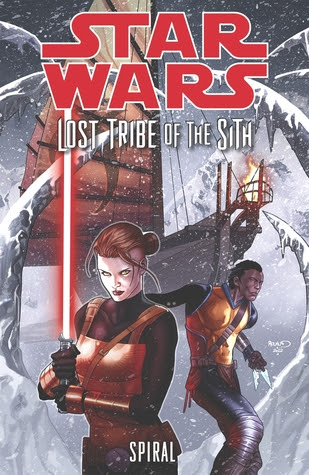 Title: Star Wars: Lost Tribe of The Sith-Spiral
Author:John Jackson Miller
Genre(s):  Graphic Novels, Sci-Fi
Published July 2013
Pages: 125
Publisher:  Dark Horse Comics and Diamond Book Distributors
Buy it or View on Goodreads
Summary: "An ambitious Sith rebel, Spinner, is about to upset the balance of a lost tribe of Sith. When he is arrested for treason and sent away on a prisoner vessel, thoughts of overcoming his station, destroying the Tribe, and even finding a way to escape into the galaxy lead Spinner to a powerful, long-forgotten weapon. A rival stowaway Sith on that same vessel has her own ideas about the future of the Tribe. They don’t need eradication; they need a new leader—her! Collects Star Wars: Lost Tribe of the Sith #1–#5."
Review: Overall, this was nicely done. The story takes place around the middle/end of the 'Tribe of the Sith' series. So I must say that before reading this, go read at least the first 4 books. They are just novella's so they should not take very long. It gives a lot of backstory to what is going on.

One of the first things I liked it this book was a line when the the Keshiri (the land natives) are talking about who the Sith are, and they say “We know, because they told us so!” I had to laugh. Poor fools do not realize any world exists besides there own so the think the Sith are basically Gods (or descendants of Gods).

The Sith have been stranded on the world for around 2000 years. They have re-cultivated a new life for themselves. Yet it is also painfully obvious they have forgotten some of the true ways of the Sith. Yet they strive to use what they know.

An escaped slave and Sith come across a group in the southern reaches, previously unexplored. There the meet The Doomed. Also they unleash an old Dark Lord (Dreypas).

While most Star Wars fans are aware of the Jedi Code and Sith Code, this book introduced a new code. The Code of the Doomed. "War is a Lie. There is no defeat, there is serenity. There is no victory, there is death. Through power, I am enslaved. Through the force, I am doomed.” I loved it!

The artwork was probably the biggest downfall. It seemed rushed. And too much red was used all over. Now I know the artist is good because at the end are some great full page signed pictures that are great, and more varied in color. I just wish that detail went into the rest of the book.

Overall, a fun adventure. It is a great portrayal of what happens years after a powerful nation may be crushed and isolated. How different group evolve/adapt. The snarky comments made throughout the story made it that much more fun.

A big thanks to Diamond Book Distributors for the book.