REVIEW Plague of the Dead (1) by Z.A. Recht-ZOMBIES! 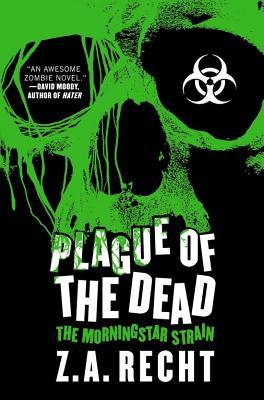 The Morningstar Strain: Plague of the Dead (1)
by Z.A. Recht
Genre: Horror
Pages: 320
Published: May 2010
Publisher: Pocket Books
Official Summary:  "The end begins with a viral outbreak unlike anything mankind has ever encountered before. The infected are subject to delirium, fever, a dramatic increase in violent behavior, and a one-hundred percent mortality rate. Death. But it doesn't end there. The victims return from death to walk the earth.

When a massive military operation fails to contain the plague of the living dead it escalates into a global pandemic. In one fell swoop, the necessities of life become much more basic. Gone are petty everyday concerns. Gone are the amenities of civilized life. Yet a single law of nature remains: Live, or die. Kill, or be killed. On one side of the world, a battle-hardened General surveys the remnants of his command: a young medic, a veteran photographer, a brash Private, and dozens of refugees, all are his responsibility-all thousands of miles from home. Back in the United States, an Army Colonel discovers the darker side of Morningstar virus and begins to collaborate with a well-known journalist to leak the information to the public...The Morningstar Saga has begun."
Review:  What a great story! I grabbed this on a whim at the library. I knew nothing about this book at it was my first ever zombie novel. A perfect blend of action and survival with a side-serving of zombie horror.

A new virus strain has been discovered, called Morningstar. While scientists meddle in making new discoveries, a few people are soon infected. While nothing is amiss at first, the virus slowly works through it's victims. The strain is very contagious. A bite or scratch is guaranteed to infect you. They touch your blood and you are screwed. But their blood and bodily fluid touching your skin can be just as bad... This virus will spread through any contact it can.

This book focuses on that spread. How it could travel and effect the whole world. The concept is quite disturbing since it would make sense. Yet when it finally mutates, the infected go a bit attack crazy. Chaos ensues!

One thing I loved in this book was the types of infected. You had carriers who have had contact but are otherwise still normal. Once it has gone through it's incubation period, they go crazy are are on virus steroids or something. These are referred to as 'Sprinters.' they are fast, and loud. They sound the alarms to other zombies and will chase you down! Once an infected dies, they rise again. These are referred to as 'shamblers.' They are slow but quite. Can sneak up right behind you but if spotted at a distance you might be okay. My guess it its the rigor mortis kicking in that slows them down. The problems are you have to kill the infected twice! Also, regardless of speed, they DO NOT tire. They will track and chase you for miles. So being on foot is bad since humans still need sleep and rest.

Then you have the crazies who when the world falls apart, go nuts and destroy things, hurt and kill people, etc. And you have those who want to help and you have the survivalists. This book shares of the crazies but the focal points are from the helpers and survalists.

This story has a heavy military emphasis. The story focuses around mostly them. From trying to control the outbreak, to trying to get away and then figuring out what the hell to do next. It is an interesting ride. We get a lot of different viewpoints and perspectives in this book. From the military, to the scientists, to Red Cross, to a reporter. Each character has various strengths and weaknesses that we get to see, giving the story a very real feel.

some of the characters can get a bit confusing with names and the changing perspectives but about halfway though it does get a lot easier. While I like many of the characters, you do not get attached to them. They are not too deeply created for the most part. But that is a good thing. This is a zombie novel after all. Many will not make it. But there is enough deep and backround to understand and relate to them.

While lots of death occur, it is not grotesque. More action-style but the zombie survival with the feel of 'What if' that this book gives adds the element of horror. This is not for young readers. This is an adult novel. While maybe suitable to older, mature teens can be debatable.

Fast paced, easy to read and lots of action in this first book of The Morningstar Strain trilogy.