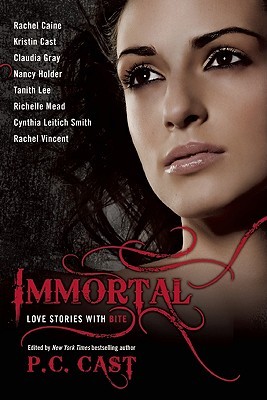 Official Summary:  "Seven of today's most popular YA vampire and contemporary fantasy authors offer new short stories that prove when one is immortal, true love really is forever. Includes stories by Rachel Caine, Kristin Cast, Claudia Gray, Tanith Lee, and P.C. Cast."
Review:  The book is a bunch of short stories. Some were really good but all were decent. P.C. Cast did a good job getting a variety of different stories. My only complaint is the title. Many of the stories had little romance (just some attraction) or love. But just a small detail. Below are my thoughts on each story individually.


1) Haunted Love by Cynthia L Smith. This was a story about a newly turned vampire who kills his uncle and starts to run a small theater. The theater is haunted by a ghost named Sonya. Cody (the young vampire) also hires a girl named Ginny. He is drawn to both. This story has interesting connections between the 3 of them but I would have liked a bit more detail and emotion in the story.

2)Amber Smoke by Kristin Cast. An odd vampire twist wit a touch of very off beat Greek mythology. A young girl dies by falling and hitting her head, is turned into a vampire upon getting kissed while dying. Each vampire has unique powers. They don't feed off blood and when they bleed their blood is amber. Very odd story.Not exactly my cup of tea but I am sure others would like it.

3) Dead Man Stalking by Rachel Caine. This story takes place in the Morganville series. It focuses on a young man named Shane. He is kidnapped by a zombie-type guy named Jerome and brought to face his father who is trying to kill all the vampires. Although I have yet to read this series this story stood well as a stand-alone and actually left me even more interested in reading Rachel Caine's other books.

4)Table Manners by Tanith Lee. A good story about a girl at a party. She comes across a vampire and starts question him on his habits, weaknesses as a vampire (sunlight, blood, mirrors, etc). In Lee's story here vampires are not obligated to any of the lore that is made about them. That its psychological. Very nonstandard vampire traits but is slowly becoming a more common theme in newer books. I like the first person perspective this story was written in.

5)Blue Moon by Richelle Mead. A good, likely futuristic story. Here, vampires are the upper class and run things. Humans are servants and lower working glass. The story focuses on a young girl trying to escape the city. She uses a human to do this. AN interesting story about the relationships between humans and vampires.

6)Changed by Nancy Holder. Great short story. Well-written and captivating! This story takes place in the city when one night vampires attack and over then next several days the city is in chaos. Survival is hard death is everywhere. A teen girl looking for her best friend amidst the fires, surrounded by those who would drain her blood.

7)Binged by Rachel Vincent. Not Really sure this is a vampire story. Its about 2 girls, one being a siren and feeds off others (energy?) while singing. The other seems to give and take opposite energies of music. Very strange and hard to follow what and how their abilities work. Especially the second girl who goes after a guy she feels drawn to. However the story was well written otherwise.

8) Free by Claudia Gray. Set in the 1800's in New Orleans. Focus's on Patrice's struggle as she learns what it really means to be free in those days. Well written for the most part but was a bit tricky to believe the time period based on writing style and description at times. However the story was very good.