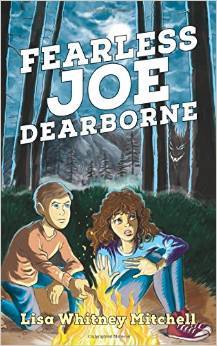 A mysterious and peculiar woman named Mrs. Chill has just been hired to care for Joe while his father is away on business. In no time, however, Joe discovers that she’s up to more than cooking and cleaning, and she has plans to destroy his family. Joe’s effort to save them results in perilous, sometimes humorous, encounters, and leads him on a journey through the threatening wilderness where he faces his greatest challenge yet.
Review:  Good book for middle graders (or ages 9-14). Joe Dearborne has earned a reputation for being fearless. Fearless...but not necessarily brave. Can you guess what he needs to do in this book? When a reckless boy needs to learn about boundaries, safety and bravery there is a lot to cover here.

Of course, Joe needed something to challenge him so after a nasty bite from a coral snake, Joe is suddenly able to experience fear. He is even afraid to go into the basement. Naturally this is not the type of thing he wants to admit to others. Add to that a new mysterious and creepy housekeeper, Joe finds himself in a situation unlike one he has ever faced.

Something is not right about Mrs. Chill (the housekeeper). She is sweet when his father is around but the longer she is a member of the house, the more menacing and wicked she seems. Yet when so many things now terrify Joe, what is a boy to do on his own?

Part mystery, part adventure, and full of fun. This book is filled with quirky characters, amusing situations and challenges that many kids go through in life (to varying degrees). Several great lessons to be learned can also be found within these pages.

Joe's character is easy to relate to. He has a severe weakness for speaking up for himself many times and still has a long way to go but every youth can be found in his shoes at least a some point. I wish he had stronger friendships. That was one thing that saddened me. No friends.

Mrs. Chill was a well set mystery. Outside of her being a "bad guy" they author does a decent job keeping her character strange and lightly veiled in mystery until the end. It really keeps you going and the one thing I can say is that I don't like her (*petulantly sticks out tongue at mental image of Mrs. Chill*).

Overall a pleasure to read.