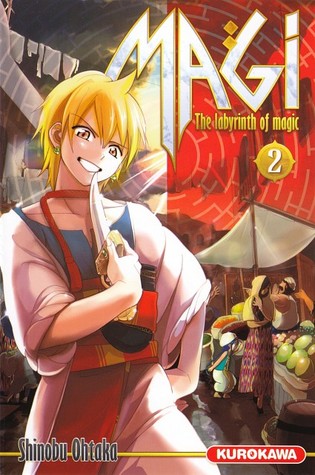 Magi: The Labyrinth of Magic (Vol 2)
by Shinobu Ohtaka

Published: Oct 2013
Publisher: Viz Media
Pages: 170
Summary:  "A young boy, Aladdin, travels a mysterious continent that is home to a mysterious ruin known as the “Dungeon”, in which great treasure is said to lay hidden. During his travels, the young boy meets Ali Baba, and together they attempt to clear the “Dungeon” in order to claim the treasures within. As their quest brings about new encounters and farewells, Aladdin will come to learn of his true destiny."
Review:  This is turning into quite a cute series. And I don't mean in a girly, romantic way. I mean that in the fun characters, adventure and the ever adorable Aladdin.

We get to learn more of both Aladdin and Ali Baba. Aladdin's character is brought more to light and he makes more sense in this one. It was also nice not seeming his being a pervy child. That disturbed me a bit in the first volume. This one was much more focused on character depth and the adventure ahead. In the first volume I was also more indifferent to Ali Baba, yet by the end of this adventure I have warmed up to him quite a bit.

A great blend of action and comedy. Fun for guys and girls both to read. The only thing I didn't care for was the random narration explaining what was happening all the time. This series has taken an interesting twist on known tales and I look forward to seeing what else it brings over time!

*Special Thanks to Viz Media via Edelweiss for providing me a eCopy to review.