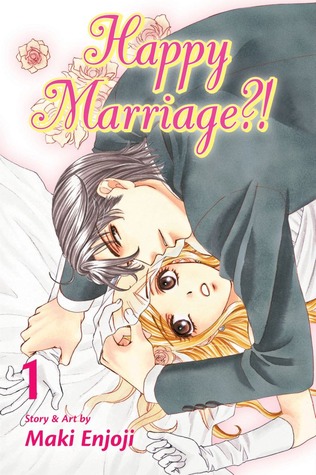 
Buy it or View on Goodreads
Summary: "Men - they're the root of Takanashi Chiwa's problems, which is why she never had the time nor the opportunity to have a boyfriend in her entire life. A full-time office lady and a part-time hostess, she works night and day to pay off her dad's debt from his failed business. One night at her part-time job, a high-class customer has her fired. Then the next day, she's called in to see the president - whom she had never even seen before in the office - only to find out she's to marry him! But what kind of guy is Mamiya Hokuto anyway? Will he become one of Chiwa's problems, or will he save her from them? And will this marriage even last?!"
Review:   This was a very cute and amusing introduction manga for a new series! Maki Enjoji started has this set up to be a great story, from what I can tell so far by this first book.

Chiwa is our main character for the story. A young woman, struggling to keep herself and her father from being utterly destitute. She is working two jobs just to try and manage things. Her co-workers tease her for lack of boyfriend and social life. So right away I was able to feel for her and wanted to jump in and tell the other ladies to back-off! After a frustrating night at her hostessing gig, Chiwa is called into the presidents office at her day job just to learn the president was the man she had to deal with the previous night. To make things worse, the president's grandfather wishes for the two to marry! In return, all her financial burdens will be lifted. Chiwa reluctantly agrees to marry the president (Hokuto) to save her family.

This story has some real life drama, mixed with some cute comedy (such as when Chiwa learns what a slob her new husband is) and just a hint of a beginning for romance! While the story theme is an old one, I feel the author has definitely put her own spin on it. This is a very cute, amusing Shoujo book and I look forward to seeing where the series leads!

There is a lot of possible situations that can arise between them. Especially being he is her boss as well and that She is very much an innocent young women without much experience with men or relationships while he seems to have had his share. Some situations are touched on in this book, others I am curious to for the future volumes. I love how each situation is dealt with. Often making me squeel slightly or giggle or other involved reactions that I couldn't help but express. Some of the situations are for a more mature audience so I do recommend more for older teen or adult readers.

Another thing I loved here was the artwork style. The characters are nicely drawn in a cute, style without the outlandish, completely unrealistic expressions that some comic/manga's have. It is easy to feel how 'real' this story is. With a down-to-earth plot and characters to match. It all went together very nicely.

*I received an eCopy of this book from Viz Media in return for a fair/honest review. All opinions are my own and no money or other gifting was accepted/given/offered.