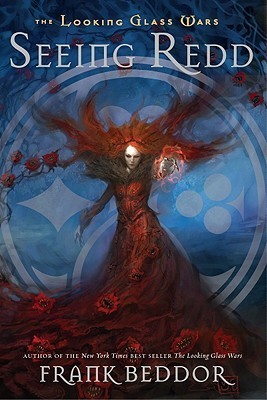 Summary: "Alyss of Wonderland's rules has only just begun, and already those who prefer chaos to peace are threatening to destroy everything worth imagining. Trailed by newly appointed royal bodyguard Homburg Molly, Alyss is doing her best to keep pace with the non-stop demands of being queen while attempting to evade Molly for a few private moments with Dodge.

Alyss' life is a challenging mix of duty, love and tough decisions, and then a series of phantom sightings set fire to an urban myth of Her Imperial Viciousness' return and have everyone...Seeing Redd.

Has Redd somehow freed herself and her chief assassin, The Cat, from the confides of the Heart Crystal? If not, then who has resurrected Redd's brutal foot soldiers the Glass Eyes and set them loose to attack Wonderland on all sides?

Battles rage, looking glasses explode, and the Alyssians once again unite to defend White Imagination in this fast-paced follow-up to the New York Times bestselling The Looking Glass Wars."

Review:  This is the sequel to The Looking Glass Wars.

Redd has been banished from Wonderland. She is determined to find her way back to her world by any means necessary. Alyss is the new queen who has much to learn about ruling. And a new enemy is making his move. King Arch of Borderlands is determined to have wonderland for himself. He reeks havoc and even kidnaps Molly.

Once again, Frank Beddor has done am amazing job of recreating the magical realm of Wonderland. All the favorites from the last book plus some new faces. Hatter continues to remain my favorite character of the story. We get a lot of insight on Redd and learn a lot about Arch. We also make progress getting to know Molly and Dodge. However, I feel as though Alyss was a bit stagnant in this volume.

Seeing Redd is darker than the last. The villains are nastier than before, and smarter. The book also plays on a more political playing field at times. A full scale war involving the Caterpillars, Wonderlanders, Borderlanders, and men of earth clash in this next installment to the series.

Again, I loved the character growth and backround information we get here. There were a few dull moments in the book where the pace seems to die off briefly but is quickly back to normal. Overall, a very enjoyable, magical adventure for any with Imagination!