There are some good stories in here!  Especially the one by Aprillynne Pike.  I wanted more...  It could have been a fun-length novel!  If I am lucky she may expand on the story.  Some stories are just odd though.  Still, worth checkin out in my opinion.  I have a few more stories to read and then I will get a review up for you all! Riley, a teen orphan boy living in Victorian London, has had the misfortune of being apprenticed to Albert Garrick, an illusionist who has fallen on difficult times and now uses his unique conjuring skills to gain access to victims' dwellings. On one such escapade, Garrick brings his reluctant apprentice along and urges him to commit his first killing. Riley is saved from having to commit the grisly act when the intended victim turns out to be a scientist from the future, part of the FBI's Witness Anonymous Relocation Program (WARP) Riley is unwittingly transported via wormhole to modern day London, followed closely by Garrick.

In modern London, Riley is helped by Chevron Savano, a seventeen-year-old FBI agent sent to London as punishment after a disastrous undercover, anti-terrorist operation in Los Angeles. Together Riley and Chevie must evade Garrick, who has been fundamentally altered by his trip through the wormhole. Garrick is now not only evil, but he also possesses all of the scientist's knowledge. He is determined to track Riley down and use the timekey in Chevie's possession to make his way back to Victorian London where he can literally change the world. A young boy, Aladdin, travels a mysterious continent that is home to a mysterious ruin known as the “Dungeon”, in which great treasure is said to lay hidden. During his travels, the young boy meets Ali Baba, and together they attempt to clear the “Dungeon” in order to claim the treasures within. As their quest brings about new encounters and farewells, Aladdin will come to learn of his true destiny. Think vampires are romantic, sexy, and powerful? Think again. Vampires are dead. And unless they want to end up staked, they have to give up fanging people, admit their addiction, join a support group, and reform themselves.

Nina Harrison, fanged at fifteen and still living with her mother, hates the Reformed Vampire Support Group meetings every Tuesday night. Even if she does appreciate Dave, who was in a punk band when he was alive, nothing exciting ever happens. That is, until one of group members is mysteriously destroyed by a silver bullet. With Nina (determined to prove that vamps aren't useless or weak) and Dave (secretly in love with Nina) at the helm, the misfit vampires soon band together to track down the hunter, save a werewolf, and keep the world safe from the likes of themselves.

The perfect anecdote to slick vampire novels, this murder mystery comedy of errors will thrill fans of Evil Genius.

Also, I would love to know feel free to use this to let myself and others know what you are reading.   Just add your name to the linky list. 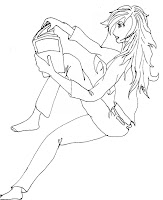