The Beginning of This, The End of That by James Matteson (review) 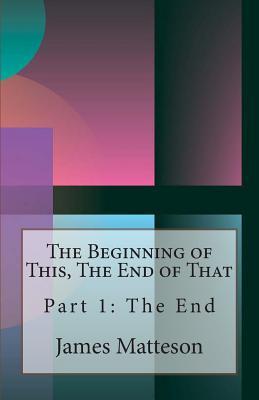 The Beginning of This, The End of That: The End (1)

Pages: 368
Self-Published
Summary:  "After an iron astroid hits the earth killing almost everyone, those who survive begin to write stories. Those stories became the foundational documents of a new civilization. 1,000 years later a scholar at a university collects the myths and publishes them. This book contains those stories. The Beginning of This, The End of That is a literary novel that examines the controversy surrounding story itself in society, in governmental rule, and in religion. The myths and legends contain the travels of two college graduate students, Ewan and Alysa, in a fantasy adventure across pagan Europe in the 7th century, where the gods themselves are under attack. The book's fictional editor, Professor Harkness, comments about each myth. The story has elements of Umberto Eco's "The Island of the Day Before" and Phillip Pullman's "His Dark Materials trilogy."-  Goodreads Summary
Review:  First off, I need to admit that I did not finish this book. I wanted to enjoy it. While I was expecting something a bit outside my normal reading interests, I was not expecting this. I started this book full of curiosity and stopped feeling very confused and frustrated.


The writing style is very clean-cut and precise which can be good but in this case was too precise making it seem a lot like a textbook at times. The premise of the story taking place after an alien invasion was interesting but the way it is described quickly had me lost and I had to re-read the beginning chapter, then the very long introduction to the book. The introduction is actually PART OF the story! That was new to me. To understand what is going on, the reader MUST read this. The author is presenting the book as a real account so the intro is not an actual author into.

So after finally getting that down, I continued reading. The book is filled with parables and mythologies. While somewhat interesting, I quickly found myself looking up information as to what the characters are talking about. It felt like a secret language in which I had no clue what was happening. This put me right back on the frustration train. After about 100 pages I just gave up. I spent more time looking up what the characters were talking about then actually reading the book. I felt that with the plethora of various myths, parables and other religious context mixed in this a reference section would have been handy. Again, reminding me more of a textbook.

So I gave up. To those who study religions and mythology, they may really enjoy this. I like my mythology but I am a bit more straightforward and relaxed in my interest.  James E. Matteson is a technical writer by trade and it shows in this. A little too much for fictional writing in my opinion.